My Live Interview with Hall of Fame President, Jeff Idelson 7/5/13

As some of you may remember, back in December, I had the great honor to interview Jeff Idelson, the actual President of the Baseball Hall of Fame. The interview was done over the phone and Jeff couldn't have been any nicer. Here's a link to that interview, in case you want to check it out again.

Here's a great picture of Jeff standing next to two of my favorite Yankees ever, Whitey Ford and Yogi Berra. 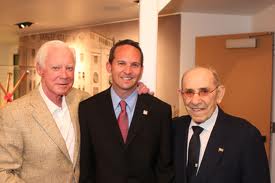 I stayed in touch with Jeff since the first interview, and he was kind enough to invite me back up to Cooperstown for the Hall of Fame Classic, which took place over Memorial Day weekend. If that wasn't enough, Jeff (and HOF Director of Communications, Craig Muder) helped arrange for me to get press credentials, so I got to interview a whole bunch of players like Rickey Henderson and Goose Gossage, and I also got to meet and interview Jeff Idelson live!! That was so cool!!

It was a bit intimidating at first, since I walked into a big gymnasium with all these other people from the press and seated in all these chairs around the gym were about twenty former MLB players, including four Hall of Famers, plus Jeff.

Anyway, without further ado, here's a link to the video filmed by Roger Lansing, the multi-media producer for the Hall. I hope you like it.

One more thing, save the date of June 12, 2014, which is the 75th anniversary of the opening of the hallowed Hall of Fame. There will be lots of great things happening in Cooperstown, and the U.S. Mint will even be issuing a special coin.

And check back again real soon for more of "all the buzz on what wuzz."
Posted by Matt Nadel at 11:55 AM