I'm back from camp and I have lots to tell.  So today's post is going to be pretty long, but it's worth your time. While I was at camp, I was invited to go to Joe Torre's Safe At Home Foundation Charity Golf and Tennis Classic. I was involved in the golf portion of the event and got to meet and interview a lot of awesome people. Torre did not have time to answer the questions live, but I emailed them to him and the answers should be in a future post very soon. Anyway, before I get to the interviews, let me tell you a little bit about the foundation and why Joe and his wife, Ali, started it.

Joe Torre grew up the youngest of five children in Brooklyn, NY. His father, Joe Torre Sr., ruled his home very violently. He was an abusive husband and father, physically and emotionally. Joe kept the abuse a family secret for a long time. However, in December 1995, Ali and Joe attended a seminar called Life Success. As a result of their participation in the seminar, Joe began to reveal the secrets of his childhood experiences with domestic violence. Ali and Joe wanted to teach kids and adults about the issue of abuse in households. In 2002, they started the Joe Torre Safe At Home Foundation. The mission of the Foundation is to educate people on how to stop domestic violence and save lives. In 2005, the Joe Torre Safe At Home Foundation opened its first school based program called Margaret’s Place in the Bronx, NY. Margaret’s Place, a tribute to Joe’s mom, is a program which gives students a safe room in a school where they can meet with a professional counselor trained in domestic violence. Currently, the Foundation has ten fully funded Margaret’s Places in NYC, L.A., Westchester County, NY and New Jersey. 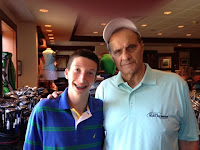 Now that you know about the Foundation, it's on to the interviews!

The first one is probably someone who you may not know, which is fine. He used to be the White House Press Secretary for President George W. Bush and currently owns a sports public relations firm called Ari Fleischer Sports Communications. Ladies and gentlemen, Ari Fleischer.

Matt: How did you get into Sports PR after you left the White House?
Ari: I was approached by a man named Sandy Montag at IMG who suggested the idea and I liked it.

Matt: What's your secret to dealing with stress, considering it was usually stressful in the White House?
Ari: Every day was a crisis in the White House. All you need to do is keep calm, levelheaded, and be ready for anything.

Matt: Who is your favorite player in baseball history?
Ari: Ron Guidry, because I saw him pitch when I was growing up and he was a great pitcher. 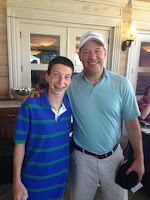 Well, thanks to Ari for answering my questions.

Now on to the second interview. This person played in the majors as a pitcher, pitched a perfect game in pinstripes, won a couple of World Series on the Yankees and is currently one of the YES Network's color commentators. Without further ado, here is an interview with David Cone!

Matt: Do the pitchers who have thrown a perfect game have some sort of club?
David: I don't think so. However, David Wells, Don Larsen and I talk a lot together. (Note from Matt: Larsen is the only pitcher to throw a perfect game in the World Series: 1956, Game Five, Brooklyn Dodgers vs. NYY, and Wells threw a perfecto in 1998 against the Twins.)

Matt: If you could pitch against any hitter in baseball history, who would it be?
David: Either Babe Ruth or Jackie Robinson.

Matt: As an announcer, if you could make a home run call for any hitter in baseball history, who would it be?
David: I would have to say Roger Maris. 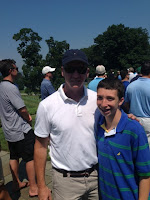 That's the interview with David Cone. Thanks Dave!

On to interview number three! This is a person that I'm sure all New Yorkers would know. He was the Mayor of NYC before Michael Bloomberg and is a die hard Yankees fan, Mr. Rudy Giuliani!

Matt: What is your favorite World Series of all time?
Rudy: Definitely 1996. It was my first year as mayor and my favorite team won the title. Then, I got to invite the team over to my house, which made it even better!

Matt: Who is your favorite player of all time?
Rudy: Yogi Berra. He's the best clutch hitter I've ever seen. 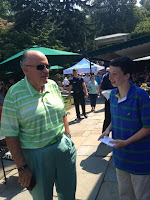 It was an honor talking to Mayor Giuliani and I thank him for answering my questions.

Now, on to the next interview! This guy you might not know, but he's a very important person. He graduated Harvard Law School and is one of the five Executive Vice Presidents for Major League Baseball. You are about to read an interview with Mr. Robert Manfred! (Note from Matt: Rob attended the golf event, but I was never able to meet up with him live. So this email was done afterwards by email.)

Matt: Did you play baseball or other sports as a kid?
Rob: I played baseball, basketball, golf and tennis as a kid. I actually played collegiate tennis for two years.

Matt: What team did you root for as a kid? Who were your favorite players growing up?
Rob: I was a Yankee fan. My favorite players were Mickey Mantle and Bobby Murcer. In my first trip to a Major League game, I saw Mantle hit 2 HR’s in Yankee Stadium.

Matt: If you could've attended any World Series in baseball history, which one would it have been and why?
Rob: 1978, Yankees and Dodgers. As I said, I grew up a Yankee fan. I watched every minute of this series on TV and was captured by the match-up of two iconic franchises.

Matt: Do you have any cool baseball mementoes in your office at MLB? If so, what's your favorite?
Rob: I have a few things. My favorite is a drawing of Fenway Park given to me by John Harrington, with whom I had and have a long professional and personal relationship.

Matt: Since you went to law school, how did you end up at MLB, and not at some place like a law firm?
Rob: I was a partner in a big law firm before I joined Baseball. The MLB was a client of the firm and that is how I ended up working for the Commissioner. 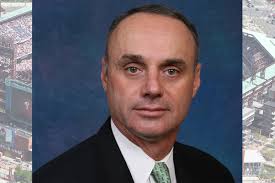 Shout out to Rob for answering my questions. I really appreciate it, especially given how busy he must be in the middle of baseball season.

Finally, the last interview! The following interview is with a Hall of Fame pitcher. (Note from Matt: This is my ninth interview with a Hall of Famer!!) He pitched for the Cardinals in the '60s and '70s. He won two World Series rings and destroyed the Yankees in one of them to receive his first ring. In 1968, this pitcher had an ERA of 1.12 as a starting pitcher, one of the lowest ERAs ever! Now, ladies and gentlemen, here is the interview I conducted with Hall of Famer...Bob Gibson!

Matt: When you were playing for the Harlem Globetrotters, what was your specific skill?
Bob: Makin' baskets!

Matt: Did you ever challenge fellow HoFer Fergie Jenkins, who also played with the Globetrotters, to a one-on-one basketball game?
Bob: Fergie was a little after my time so no.

Matt: Do you think any starter will have a 1.12 ERA again?
Bob: Probably not. The problem is that pitchers don't pitch as many innings now, which makes it harder to get such a low ERA.

Matt: If you could pitch against anyone in baseball history, who would it be?
Bob: YOU!!!! 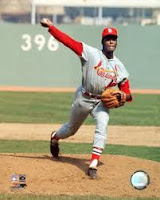 Well, that's all the interviews. Thanks to Bob for answering my questions. Not sure how fast he pitches today, but I'd love to try to hit against him. Anyway, thanks for reading this post. I hope it was enjoyable. Check back in a couple of days for more of "all the buzz on what wuzz."
Posted by Matt Nadel at 6:50 PM