My Interview with Rickey Henderson 7/23/13

Here's the last video in my series of Baseball Hall of Fame Classic live interviews. If you don't know who it is, here's a hint: this outfielder played in four decades and is most remembered for his ability to steal bases and score runs. If you haven't guessed who he is, I'm talking about none other than Hall of Famer Rickey Henderson! 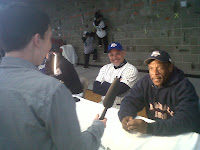 Before you watch the interview, let me tell you a little bit about Rickey. Rickey "Man of Steal" Henderson played from 1979 to 2003 with an abundance of teams, but mainly the Oakland Athletics, New York Yankees, and Blue Jays. Rickey is most famous for stealing the most bases in a career with 1,406. In 1982, Henderson set the record for stolen bases in a single season with 130. He went on to lead the majors in steals 12 times during his career. In 2001 with the Padres, he hit a home run which put him on top for most runs scored in a career with 2,295. Rickey also holds the record for walking the most times in a career unintentionally with 2,129. The 11-time All Star won the 1990 American League Most Valuable Player Award, had 3,055 career hits, and took home World Series rings with the 1989 Athletics and the 1993 Blue Jays.

Well, that's all I have on Rickey. If you'd like to watch his interview, just click here.

Hope you liked the interview. Please check back again real soon for more of "all the buzz on what wuzz."
Posted by Matt Nadel at 6:40 PM