As I mentioned in a past blog post, over the next couple of weeks I will be posting the video interviews taped by the Hall of Fame's Multi-Media Manager, Roger Lansing, of me interviewing various Hall of Famers and other retired players when I was at the Hall of Fame Classic.

Today I will be focusing on a player who may not be a Hall of Famer, but who is a Hall of Famer in the hearts of many Yankee fans for helping to spark the Derek Jeter World Series run of championships.  If you haven't guessed who I'm talking about, it's none other than Jim Leyritz.  Leyritz played for a bunch of teams during his 11 year career including the Yankees, Angels, Red Sox and Angels.  His nickname, as he mentions in his interview, was the "King."  He didn't make any All Star teams, but he was very clutch. He is most famous for a big hit (see picture below) he had while he was playing for the Yanks. If you want to see Jim's very entertaining interview, just click here. 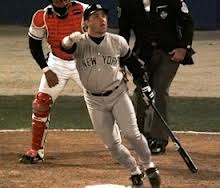 Hope you liked the interview. Please check back again real soon for more of "all the buzz on what wuzz."
Posted by Matt Nadel at 6:56 PM