I have another fun interview for you today. This one is with Red Sox third base legend... Frank Malzone! I know that he's not the most talked about person in baseball history, but he was really good in the 1950s and '60s. Because he's not that well known, let me tell you a little bit about him.

The Bronx-born Malzone (yes, he was born in the Bronx, but played for the Sox) played for the Red Sox and Angels from 1955-1966. The third baseman hit .274 lifetime with 133 homers and 728 RBIs. The eight-time All Star is famous for winning the first Gold Glove for a third baseman in history in 1957. He won the next two Gold Gloves for third base as well (and then Brooks Robinson came along). He is also famous for winning the Sophomore of the Year Award in 1957 (the award was started in 1952 and was discontinued in 1962). That's basically all you need to know about Frank before reading the interview, so let's get right to it.

Matt: Which pitcher was the hardest to hit against for you?
Frank: Jim Bunning was always a very consistently good pitcher. You had to work a little bit harder against him at the plate than against anyone else.

Matt: You played with two players who won the Triple Crown during their careers, Ted Williams and Carl Yastrzemski. Did their style of play influence how you approached the game?
Frank: I just played the game as hard as I could and, hopefully, I made everyone happy with my accomplishments.

Matt: Was Ted Williams as exciting to watch back then as people describe him today?
Frank: He was a great ballplayer. Very electrifying. It was also very fun to watch him. He was pretty smart, too. He could talk baseball forever.

Matt: Did winning the first Gold Glove for a third baseman in history mean a lot to you?
Frank: I didn't really appreciate it at the time. You don't really realize what you've accomplished until it really sinks in.

Matt: What do you consider your greatest MLB accomplishment?
Frank: During one of the All Star Games I played in, I faced Hall of Famer Don Drysdale of the Dodgers. I had never faced him before, but I knew he pitched fast and hard. So, what's the first pitch he throws at me? A hanging curveball. I hit it right out of the park. So, hitting a homer against Don Drysdale would have to be my greatest achievement in the my MLB career.

Matt: Was it a pain to face the Yankees back in the day or was it fun and exciting?
Frank: I think it was exciting because I got to visit my hometown sometimes. We didn't always beat them, but it was pretty fun.

Matt: What did you think about the Curse of the Bambino?
Frank: I think it made the fans go nuts, seeing us not win a championship for 86 years. I'm just happy we eventually won one, or else the fans would hate us.

Matt: You grew up in the Bronx at the beginning of the Yankees dynasty. Were you a Yankees fan?
Frank: I wasn't a big baseball fan growing up, but if I was rooting for someone, it would've been the Yankees.

Matt: Did your Sox teammates make fun of your Bronx background?
Frank: They didn't do that kind of stuff to me.

Matt: Did you ever provide advice to Sox third baseman Wade Boggs?
Frank: He was a pretty faulty third baseman when I met him at spring training in the beginning of his career. I worked with him on some stuff and he learned it pretty quick and he became a great ballplayer. 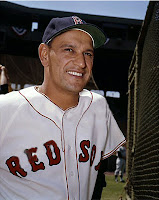 Well, that's the interview. Frank was a very interesting and super nice guy and I really thank him for agreeing to be interviewed by me. I also want to give a special shout-out to Joe Pickering Jr., the great baseball songwriter who introduced me to Frank.  If you like baseball songs, click here to check out Joe's website.  Anyway, I hope you enjoyed the interview. And don't worry, I will be posting more frequently. I've just had a lot of schoolwork. Thanks for reading!
Posted by Matt Nadel at 1:26 PM