Pauly Deserved A Hof Induction, Pauly Got A HoF Induction 1/30/13

I have no idea why I haven't blogged about this guy in the past. Why do I say that? Only because he is my favorite American League player in the history of baseball! I'll give you a hint: he hit for average, was named 1993 World Series MVP, and "ignited" his team every time they were in trouble. If you haven't guessed yet, his name is Paul Molitor.

Paul "The Ignitor" Molitor's career with the Brew Crew, Jays, and Twins from '78-'98 can be summarized in one word: hitting. The seven-time All-Star batted .300 or better in 12 seasons, giving him a career BA of .306. He was also speedy on the base paths, stealing 504 career bases. Actually, speaking of speed, Paul is the only player in history to have his 3,000th hit be a triple.

Molitor got a record five base hits for the city of Milwaukee in Game 1 of the 1982 World Series against the Cards, a series they would sadly lose 4-3. Jubilantly, Molitor earned World Series MVP honors for Toronto in 1993. Joe Carter may have "touched 'em all", but it was Paul with a .500 batting average and 12 base hits that helped the Blue Jays win their second consecutive Fall Classic. Molitor totaled 3,319 hits in his career, good for eighth on the all-time list. That's why he's my favorite player in AL history. 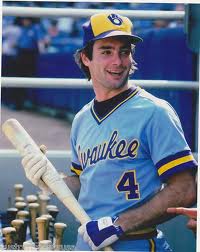