Today, I have another interview for you! Guess who it's with: Kenny Albert!!!! You may have heard of his dad, Marv, but in case you haven't heard of the super-busy, multi-talented Voice of the New York Knicks Jr., let me tell you a little bit about him.

Kenny is the broadcaster for the New York Rangers, as well as a play-by-play announcer and field-level reporter for Fox in baseball and the NFL. He has done work for NBC's Olympics coverage, as a play-by-play announcer for men's and women's ice hockey at the last three Winter Olympics. He used to be the announcer for the Washington Capitals and Wizards and was a part-time announcer for the Washington Nationals in 2005, their first year of existence. Also, Albert is a substitute play-by-play announcer for New York Knicks games. In other words, Albert is the only current announcer to broadcast all four major sports in the U. S.!!! I say that is pretty impressive. In fact, in four days, he called the play-by-play of a Vikings game against the Steelers on Fox and then hosted the New York Yankees' locker room celebration after clinching the American League Championship Series that night. The next night he broadcasted a Rangers game on radio and the next day he called the play-by-play of the New York Knicks season opener. That's even more impressive!!! Anyway, before I give away Kenny's entire life story, let's get to the interview: 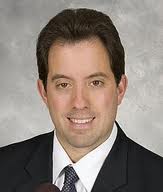 Matt: It seems that hockey was the first sport you were into as a kid. When did you get into baseball?
Kenny: I loved all sports as a youngster. I played hockey, basketball, baseball and tennis. I followed all of the major sports. I watched (and listened to on the radio) as many games as I could, and also kept scrapbooks, and box score books for all my favorite teams.

Matt: Who was your favorite baseball player growing up and all time?
Kenny: I was a Yankee fan while growing up during the 1970s. Among my favorites were Thurman Munson and Reggie Jackson. As a professional broadcaster, there are many players I have admired. It has been an honor and privilege to call games involving some of the greatest players of all-time over the last two decades. Among my greatest baseball memories are attending Ron Guidry's 18-strikeout game, as well as Cal Ripken's record breaking game in 1995, when he broke Lou Gehrig's consecutive games played streak at 2,131 games; and working as the sideline reporter for FOX during the 2003 and 2004 ALCS' between the Yankees and Red Sox.

Matt: What baseball team did you root for as a kid?
Kenny: The Yankees. I also attended a lot of Mets games during the mid-1980's, including their 1986 Championship season.

Matt: If you were able to call any one World Series game in baseball history, which one would it be and why?
Kenny: Don Larsen's perfect game in 1956 or Reggie Jackson's 3 HR game against the Dodgers. (A note from Matt: The game in which Reggie cracked out 3 homers was Game Six of the 1977 World Series at Yankee Stadium against LA. New York clinched the Series that night and Jackson won MVP.)

Matt: What sports did you play as a kid and which do you play now?
Kenny: I played all sports as a kid. I played on my "club" hockey teams in high school (Schreiber HS in Port Washington, NY) and college (NYU). I still play hockey these days (although I haven't played often over the past year) and enjoy playing tennis.

Matt: Since you do so much broadcasting, how do you keep your voice strong?
Kenny: I really have no "tricks". I have been very fortunate; I have only missed one assignment during my career due to a voice issue - a hockey game in 1996. I feel getting enough sleep during busy times is a major factor. I worked 8 NHL playoff games in a 10 day span during the 2012 playoffs, and fortunately did not have any voice problems. One of those games went into triple overtime! (Another note from Matt: In case you didn't know it, the NHL playoffs are called the Stanley Cup playoffs.)

Matt: What do you think should be done to increase baseball history awareness among kids today?
Kenny: There are so many resources out there: books, magazines, newspapers, and the Internet. If kids are interested in the history of baseball, they can find the information somehow.

Matt: Do you have any suggestions for kids who want to be broadcasters in the future?
Kenny: Get as much experience as possible, whether at high school or college radio and TV stations, internships or writing for a school newspaper. Preparation is another key. You can never be over-prepared for a broadcast. Take a tape recorder to a high school, college or minor league game and do an actual broadcast. Getting reps is the best experience you could ask for.

Well, that's the interview. I really want to thank Kenny for agreeing to let me interview him. Also, I wish him an early happy birthday, which is coming up on February 2nd. So, if you see him around, wish him a happy birthday (and feel free to tell him that Baseball with Matt reminded you). Anyway, I hope you enjoyed this interview. Thanks for reading!
Posted by Matt Nadel at 12:47 PM