I have yet another interview for you! This time, it is with Milwaukee Brewers owner, Mark Attanasio! He was a really interesting guy and a fun person to interview. We spoke for over an hour!! And the Brewers happen to be my favorite National League team!! Anyway, in case you didn't know much about him, here's a little bio on Mark:

Attanasio, a Bronx, New York native from the '50s, is a Los Angles-based investment manager. In September 2004, he reached a deal to buy the Milwaukee Brewers from the Selig family. The deal was approved by MLB at the winter meetings on January 13, 2005. He graduated from Brown University in 1979. In 1982, he graduated from Columbia Law School. He founded Crescent Capital Partners in 1991 which is now part of TCW. In 2001, Attanasio became part of the board of directors at the company, Global Crossing. He also has his own bobblehead! Well, that's basically all you need to know about him before the interview, so let's get right to the interview. 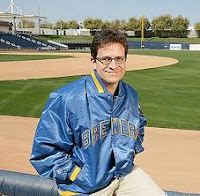 Matt: What sports did you play as a kid?
Mark: As a kid growing up in the sixties, you played all sports. Me personally, I played the four major American sports, and then the school lot sports like stickball, punchball and ringolevio (see picture below and here's a link to the actual rules).

Matt: What sports did you watch as a kid?
Mark: I watched baseball, football, basketball, and hockey. The Olympics wasn't on really when I was a kid, but in the '70s, I remember watching them.

Matt: Considering you are from the Bronx, were you a Yankees fan growing up? What’s your favorite MLB memory from when you were a kid?
Mark: I was a pretty big Yankees fan as a kid. My favorite MLB moment as a kid was when I went to the Yankees' 1966 Opening Day game. I sat right next to the bullpen, where I could see Al Downing (the pitcher who gave up number 715 to Hank Aaron about a decade later). The Yankees lost that game to the Tigers, 2-1.

Matt: What is your favorite Brewers moment in the team’s history?
Mark: I think it would have to be when Nyjer Morgan won the 2011 NLDS for us against the D-backs. I was sitting in the from row of that game and as soon as Carlos Gomez scored, I went ballistic. I actually ran onto the field and jumped on Gomez's back. It was pretty funny. 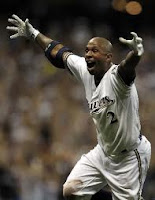 Matt: How did you feel when the Brew Crew moved to the NL in 1998? Since Milwaukee fans have the experience of once having had a team with a DH and now they don’t, do you think the fans have a preference?
Mark: It was very important in team history, but I don't remember because I was so in love with the Yankees at the time and the Brewers weren't doing so well. When I became the owner of the Brewers, I got a lot of requests, like to bring back the old uniforms (see below picture), but I don't recall anyone wanting to bring back the DH to Milwaukee. 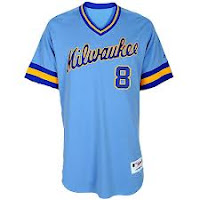 Matt: What inspired you to buy the Brewers?
Mark: It was always a dream of mine to own an MLB team. I remember back in school when I would always say that. When the team was up for sale, they wanted additional investors, so that's how I got involved. Eventually, I paid the most money and got the team.

Matt: Have you ever tried to grow a Rollie Fingers mustache?
Mark: That's a pretty funny question, but I have never been good with facial hair. Growing out mustaches has always been troublesome for me. [Note from Matt: Here's my post about the best facial hair in the Hall of Fame.] 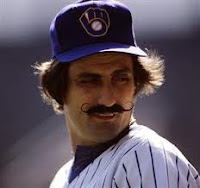 Matt: Do you have any suggestions on how to increase baseball history awareness among the younger generation of fans today?
Mark: There's no better way to promote baseball history than the way you are doing it. That's the way it should be done.

Matt: Can you tell us a little about the Heal the Bay charity that you are involved with?
Mark: It's a charity that helps clean up the pollution out of the California water bodies. It's good for health awareness and I think it's an important thing to do. [Note from Matt: Here's the link to the charity. Check it out.  It's really great!]

Matt: Do you ever play with the bobblehead doll they made of you?
Mark: I have one, but I don't know where it is. The funny thing about it is for my 50th birthday, the Brewers made me a bobblehead of myself. They had extras so they were sold on Ebay. They sold for like $400 each! I couldn't believe it.

Well, that's the interview. I really hope you had as much fun reading it as I had conducting it. Thanks so much to Mark for letting me interview him!! He's a great guy! And a special shout-out to my dad's superstar friend, Nathan Romano, for introducing me to Mark.  Thanks for reading!

P. S. I'm thinking of a cool catchphrase that I should say after every post, What do you think it should be? Leave a comment for your idea.