Make sure that you write suggestions for future blog topics. Anyway, because Mariano Rivera is basically  out for the season with a torn ACL, I would like to blog about the great closer. So, here's Trevor Hoffman.

Whoops, forgot to put the words "national league" in parentheses after the word "great". Well, mistakes happen. Anyhow, Hoffman's career is one of the best for a closer. (Notice how I wrote "one of the best"!) He had 601 career saves, second only to Mo. From 1993-2010, with the Padres and Brewers, Trevor baffled NL teams with his devastating change up, which earned him 7 All Star Game appearances. He held the all-time saves record from '06 to '11 and is only one of two pitchers to have 500+ and 600+ career saves. Funny, he played shortstop in college! 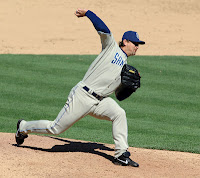