Happy Mother's Day! Today is the first blog that was suggested by one of you! So thank you to John Rogers, for suggesting to write about........

Picture this: Babe Ruth, Lou Gehrig, Bob Meusel, Tony Lazzeri, Earle Combs, and Mark Koenig. That's what every American League team had to face during the 1927 season. Those were the 1927 World Champion "Murderers' Row" Yankees. Now, you might think: "Well why were they so good?". That's where the stats come in. The combined batting average for the Yanks in '27 was .327, 142 homers, and 670 RBI, just between the six of them! The Babe hit 60 homers, the most in one season at that time, Larrupin' Lou had 175 runs batted in, the most in a season at the time, Earl Combs had 231 hits, and the team in total won 110 games and only lost 44! Some say that they won 114 games, including the World Series, which they easily swept against the Pirates. What, 110 isn't good enough? 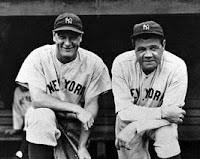