In honor of interleague play, I'm going to blog about the worst team in baseball, located in the same place that the Philadelphia A's were ( check out my last blog for more info about the 1929 A's):

Philadelphia. The home of the Phillies. The team that has been awarded the last five NL East championships. In those years the Phils were a powerhouse. Go back several decades, and you've got the laughingstock of the National League! The Phillies are the only baseball team to lose more than 10,000 games, and have only won two World Series since 1903, the year the World Series started. They have had some good players, though. Steve Carlton won 27 of his team's 59 wins in the 1972 season. Horrible year for the Phillies, but great year for Steve. They didn't make it to their first World Series until 1950, but got smothered by the Yankees, who swept the Series in four games. Their next World Series appearance was in 1980, which they won 4 to 2 versus the Royals. At the end of the Series, Phillies fans were given a survey to vote on their most beloved Philly of all time. The winner was Mike Schmidt, who was playing for them at the time! That's how bad of a history the Philadelphia Phillies have. Fun fact about the Phils: they are the only sporting franchise in the history of sports to have the name of the team based off the nickname of the residents that live in the city of their stadium. 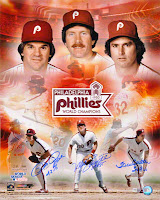