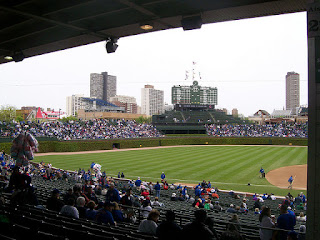 Last year I went to Wrigley Field in Chicago with my dad. It was one of the coolest ballparks I've ever seen, even though it's pretty old. It was built in 1914 and the Chicago Cubs moved in in 1916. They even have stands on the roofs of the buildings across the street for people to watch the game. This summer I'm going to another really historic park, Fenway Park in Boston. I can't wait. Wish I could've seen Ebbets Field in Brooklyn, the Polo Grounds in New York and Comiskey Park in Chicago before they knocked them all down. Being a New Yorker, at least I went to the old Yankee Stadium (the house that Ruth built) a bunch of times. While doing research, I actually found a really great site that has e-guides about current ballparks.  Check it out!!
http://www.ballparkeguides.com/