Today I have a special interview! It's with the Hall of Famer who has the best lifetime batting average of all time (.366), Ty Cobb! But wait: Ty Cobb has been dead since 1961, so how could I have possibly interviewed him? Good question. Remember my "interviews" with Jackie Robinson and Babe Ruth, where I asked someone who knew a lot about one of the hitters to answer questions as if he was him? Well, I did the same thing with this interview. The person who answered my questions as if he was Cobb is Norm Coleman, an actor who actually plays Ty Cobb on stage for the past eight years in the play "Tyrus Cobb." Norm's answers were awesome and I think they sound exactly like how Cobb himself would answer the questions.

The real Ty Cobb below: 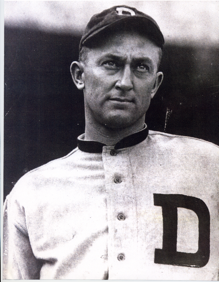 Norm below in Ty Cobb character: 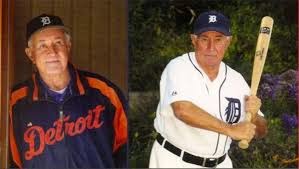 But before I present the interview, click here for a quick bio on the Georgia Peach. The link will actually take you to where you can buy my book, "Amazing Aaron to Zero Zippers: An Introduction to Baseball History, " which I highly recommend. If  you flip to chapter three in the book, you will see a whole section on "Cantankerous (meaning argumentative) Cobb." Hope you find the biography interesting. Anyway, let's get to the interview.

Matt: You faced a lot of tough pitchers during your playing days, but who was the toughest to hit against?
Ty: The two most difficult pitchers for me to handle were Babe Ruth when he pitched for Boston and Walter Johnson of the Washington Senators. Both entered the Hall of Fame with me in 1936. The Babe threw only two pitches, fastball, up high and in tight, and a curve, low and away. You knew they were coming and sometimes he’d yell at me, telling me what was coming. He dared you to hit it and if you got a hit, he’d scream at me, "You got lucky Ty." I went 22 for 67 with a batting average of .328 against George. No one threw faster than Walter Johnson. If they had radar guns back then, his fastball would clock near 100 mph. Johnson feared hitting a batter, afraid he might kill him if he hit the batter in the head. So I would step in closer to the plate, making Walter throw a little outside, making it a little easier for me to hit the ball to left and get 120 hits in 328 at-bats for an average of .366. Every hitter has one guy he can’t hit. For me, there was a little fellow named Bill Bayne (pictured below), pitched for the St. Louis Browns between 1919 and 1924. I faced him 36 times and got only 5 hits, which was a batting average of .139. I never could figure him out.

Matt: How do you think you would fare against the pitchers of today if you played in 2015?
Ty: Probably hit about .125 because I am 129 years old now. But seriously, playing today, in my prime, about .365. There are some great pitchers throwing today, Clayton Kershaw, Justin Verlander, Madison Bumgarner to name a few, but I would have no problem hitting if I played today.

Matt: Which way of hitting is the one that will win teams championships for many years to come, small ball or power?
Ty: The game today is power, fans like to see home runs. But, give me a team with 3 top starters, a strong bullpen, strong fielding up the middle, a strong bench, team unity and a smart manger who can handle all the millionaires playing and that team will win championships. For example, the San Francisco Giants. No one hitting 40 home runs on that team, but they play smart small ball at its best.

Matt: Not including you, who do you think is the best Tiger of all time?
Ty: That’s a tough question because there were so many great Tiger hitters. To name a few of my all-time favorites, I would start with two men who played with me, Sam Crawford (pictured below) and Harry Heilmann, who hit over .390 four times and .400 once. Moving up to the modern era, the slugging Hank Greenberg, who hit 58 homers in 1938, almost beating Ruth’s record. I'm also a big fan of Al Kaline and, from today, of course Miguel Cabrera. 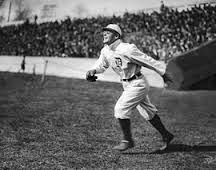 Matt: Do players of today deserve such huge contracts? Why not?
Ty: That’s the American way. Capitalism at its best. Not many people complain when CEO’s make millions, or top Hollywood actors make $20 million a movie, or top rock bands charge $400 a ticket or top entertainers in Las Vegas make big money. Thanks to television contracts, owners and players are reaping the benefits. And free agency. It is the average fan who suffers, unable to pay the high ticket prices. Besides, no one is holding a gun to the owners' heads when they sign a player to a 7 or 8 year contract for multi-millions. That is a mistake in my opinion. Think A-Rod or Barry Zito with the Giants.

Matt: If you were MLB's commissioner, what rules would you add or change to the MLB?
Ty: Outlaw the DH. Cut back on Inter-League play. Outlaw the All Star Game winner deciding which League gets home field advantage in the World Series. A truly dumb rule. And like gambling, if you are caught using steroids, you are banned for life. Go back to alternating in the World Series. That worked well for over 60 years.

Matt: Do you prefer regular Coke or Diet Coke? [Note from Matt: Ty Cobb was an early investor in both Coca Cola and General Motors]
Ty: Regular Coke. I never acquired a taste for the diet stuff. 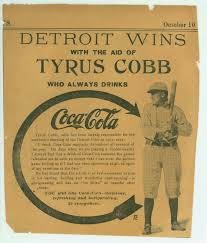 Thank you to Norm Coleman for emulating Ty Cobb so well in your answers. Click here if you would like to learn more about what Coleman has done, does, and will be doing in the coming future. Anyway, thanks for reading this interview and I hope you enjoyed it. Check back soon for more of "all the buzz on what wuzz."
Posted by Matt Nadel at 9:55 PM