So in my last post, I talked about a catch made by Dewayne Wise that saved Mark Buehrle's perfect game. The reason that I bring this up is that, in this post I want to talk about said perfecto and tell you what happened.

Mark Buehrle of the Chicago White Sox pitched in a game against the Tampa Bay Rays that would eventually become the MLB's 18th perfect game in its history. The date was July 23, 2009 at U.S. Cellular Field in Chicago, Illinois. The ChiSox came into the game holding the first place spot in the AL Central, while the Rays came in at six-and-a-half games back of the first place New York Yankees in the AL East. Opposing Buehrle was All Star Scott Kazmir, who went six strong innings, giving up five hits and five earned runs.

Mark, on the other hand, was masterful, mowing down the Tampa Bay lineup with ease. He finished the game with six strikeouts and, of course, no runs or men on base allowed. The ending score was 5-0, Chicago. Four of those five runs came on a grand slam by Josh Fields in the bottom of the second inning. That Fields homer was the first grand salami in perfect game history. Here's another fun fact about this game: the catcher for the game, Ramón Castro, had never caught for Buehle before. Speaking of behind the plate, the home plate umpire, Eric Cooper, for the game was the same ump behind the plate for Buehrle's previous no-hitter. That no-hitter took place on April 18, 2007 against the Texas Rangers. 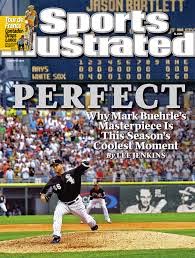 Although Mark doesn't have Hall of Fame statistics, his performance for the Sox on July 23, 2009 will never be forgotten. Anyway, thanks for reading this post. I hope you enjoyed it and check back soon for more of "all the buzz on what wuzz."
Posted by Matt Nadel at 5:57 PM