As many of you already know, I am a Yankees fan, but that does't mean that I can't root for the Mets if they just happen to be on TV. Yes, I do feel sorry for Mets fans (and Yankees fans alike), but the Mets have a pretty good history.

The New York Mets were created in 1962 in order to replace the former New York National League teams, the Giants and Dodgers, who moved to California a few years before. The Mets played their first games in the Polo Grounds, but then moved to Shea Stadium in 1964. Like most expansion teams, the Mets didn't start off well. In fact, they finished either last or second to last in their first seven years of existence. But then came the magical year of 1969. With the help of future Hall of Fame pitchers Tom Seaver and Nolan Ryan along with All Star Jerry Koosman and manager Gil Hodges, the Mets barely beat the Chicago Cubs to win the NL East, then were victorious over the Braves in the NLCS, then destroyed the heavily favored Orioles in the World Series in five games. It was the first World Series won by a New York team in seven years and it would not be the last time the Mets won it all. 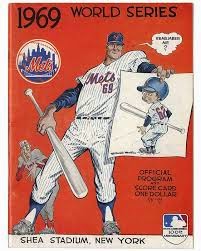 New York, after acquiring Willie Mays, went to its second World Series in franchise history in 1973, this time under the wing of the legendary Yogi Berra as manager. That Mets team was one of the worst teams to get to the Fall Classic, having gone 82-79 in the regular season. Despite this seemingly dismal record, the Mets gave the defending champion A's a run for their money, but Oakland won the Series in seven. Entering the 1980s, the Mets had not won a World Series since '69. Then came another magical year in Mets history: 1986.

The '86 Mets were full of stars, like Gary Carter, Lee Mazzilli, Darryl Strawberry and Keith Hernandez on offense and Dwight Gooden, Ron Darling, Sid Fernandez, Bob Ojeda, and Jesse Orosco on the pitching staff. The team won an astounding 108 games and the NL pennant and faced the Boston Red Sox in the World Series. The Red Sox went up in the Series three games to two and were leading after ten innings in Game Six at Shea, 5-3. The Mets proceeded to come from behind and win in walk-off fashion with the help of an untimely error by Red Sox first baseman, Bill Buckner, on a Mookie Wilson grounder with two outs in the bottom of the tenth. The Amazins then won Game Seven and were crowned champions of the baseball world for only the second time in the team's history. But it would be a year that no Mets fan would forget, as the fans in Queens, New York never stop talking about Buckner's blunder.

New York has gone to only one more World Series since 1986 and it was against the Yankees in 2000. In the first Subway Series since 1956, the Yanks whipped the Mets in five games. Sorry Mets fans, but the Bronx Bombers were in the midst of a dynasty. Actually the Mets almost got to another World Series in 2006, but lost to the Cardinals in the NLCS.

The Amazins moved to Citi Field prior to the 2009 season, but have yet to make the playoffs in the new stadium. Hopefully, they can accomplish this task in the coming years. Anyway, thanks so much for reading this post. I hope you enjoyed it and check back soon for more of "all the buzz on what wuzz."