The San Francisco Giants have won the 2014 World Series! This was greatly because of the excellent pitching of Giants starter, Madison Bumgarner, who won World Series MVP. You know who Bumgarner reminds me of? A pitcher who won over 370 career games and who had a great World Series pitching performance himself for the Giants in 1905: Christy Mathewson!

Mathewson pitched for the New York Giants and Cincinnati Reds from 1900-1916. Christy's power and poise made him one of the best pitchers of his generation, winning a then record 373 games (currently tied for third all-time) and only losing 188 in 636 games pitched. He led the league in wins four times. Mathewson also led the league in ERA five times and had an amazing career ERA of 2.13, which is tied for eighth on the all-time list.

The inventor of the "fadeaway" pitch (aka the screwball), Christy was even better in the World Series than he was in the regular season. In eleven career World Series games, he had an ERA of 0.97! That's better than Mariano Rivera! But his best World Series was in 1905 against the Athletics. He started three games, won them all, and didn't give up a single earned run. That's right; he had an ERA of 0.00 in the '05 Fall Classic! His heavenly pitching performances in four World Series just inspired the New York Times to invent a new stat for World Series pitching called the Matty Score. It is the amount of innings pitched minus three times the amount of earned runs allowed in a World Series career. The stat is supposed to measure the quantity of how many innings a pitcher pitches and how well he pitches. Mathewson's Matty Score is 69, the best Matty score in baseball history. Sandy Koufax's, the pitcher in second, is 39. Wow!!

Christy Mathewson was elected into the Hall of Fame in 1936, becoming part of the first Hall of Fame class (which included Matty, Ty Cobb, Babe Ruth, Walter Johnson, and Honus Wagner). Sadly, Mathewson could not witness his induction because he died of tuberculosis in 1925. However, despite his untimely demise, the memory of his awesome pitching will never be forgotten. Anyway, thanks for reading this post. I hope you enjoyed it and check back soon for more of "all the buzz on what wuzz." 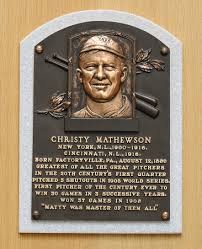