The Royals and Giants will be playing in the 2014 World Series! In honor of this, I'm going to talk about a very famous pitcher who pitched for both Kansas City and San Francisco: Vida Blue!

Vida Blue pitched for the A's, Giants, and Royals from 1969-1983, 1985-1986. In his 17 years in the MLB, he recorded 209 wins and 161 losses, along with an ERA of 3.27. Vida is known for his constant attacking of the strike zone. He had a great curveball and change up, but his best pitch was his blazing fastball, which regularly reached speeds of 100 miles an hour. With the help of these pitches, Blue recorded a lifetime 1.23 WHIP and 37 career shutouts. The six-time All Star's best year came in 1971 with the Athletics, when he went 24-8 with a league-leading 1.82 earned run average. That year, he was the starter for the American League in the All Star Game and won the AL Cy Young Award and MVP, but Oakland failed to win the pennant. However, over the next three years, '72-'74, the A's didn't just win the pennant, they won the World Series and Blue played a big role on those championship teams.

In 1978, his first year with the Giants, Blue again started in the All Star Game, this time in the NL, thus becoming the first pitcher ever to start the All Star Game with the American and National League. His Giant career was very good: a record of 72-58 over six years with an ERA of 3.52. In the midst of his time with the Giants, however, Vida played with KC for two years, winning 13 games and losing 17, while posting an ERA of 4.49. Oh, I almost forgot to mention that Vida pitched a no-hitter with the A's on September 21st, 1970 against the Twins, striking out nine in only his second year in the MLB. What an accomplishment! 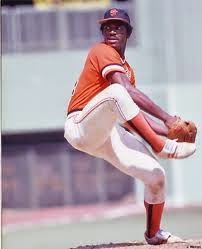 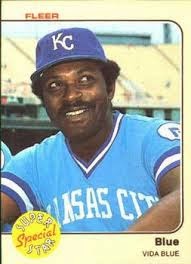 One of the most charitable athletes you will ever meet, Vida was inducted into the Bay Area Sports Hall of Fame in 1995 and still does charity work for the Bay Area. Anyway, thanks for reading this post. I hope you enjoyed it and check back soon for more of "all the buzz on what wuzz."

And if you're looking to read up on more baseball history, please check out my newly published e-book, Amazing Aaron to Zero Zippers, now available on the Kindle, Nook and iTunes.
Posted by Matt Nadel at 4:54 PM