We are more than two thirds of the way through the 2014 MLB season and, sadly, it looks as if the Chicago Cubs will not be making the postseason. However, in order to alleviate the wounds of Cubs fans, I want to talk about one of the fan favorites that played in Chicago. He was one of the best catchers of all time and one of the first catchers ever inducted into the Hall of Fame, Gabby Hartnett.

Hartnett played with the Cubs and Giants from 1922-1941. In his 20 years in Major League Baseball, the man nicknamed "Old Tomato Face" was one of the best hitters of his generation, hitting for a .297 batting average with 236 homers and 1,179 RBIs. He was the first catcher in the MLB to hit 20 or more home runs in a season, which he did in 1925 (he hit 24). Besides his prolific hitting, Gabby was an excellent fielding catcher. He caught 100 or more games in twelve seasons and led the NL in putouts four times. The six-time All Star placed in the top 20 for MVP voting ten times, winning the award in 1935. Hartnett always hit better in clutch situations and his home run for the Cubs at the end of the 1938 season that ultimately helped them win the NL pennant does nothing but prove my point. The "Homer in the Gloamin'" (as it was nicknamed because Gabby hit the home run in almost complete darkness) was not only his finest moment, but it was also one of the most iconic moments in Chicago sports history, cementing Old Tomato Face's name in Cubs' history forever. 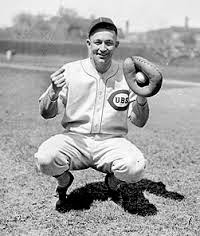 The Cubs may not be the best team now, but at least they have a storied history of great ballplayers who loved the game of baseball, one of those players being Gabby Hartnett. Anyway, thanks for reading this post. I hope you enjoyed it and check back soon for more of "all the buzz on what wuzz."