Right after the Red Sox won the 2013 World Series, many people came up to me, saying that the Sox were better than the New York Yankees. My response was usually that of course they were better because they just won the World Series. But I followed up that statement with the following one: "But when Boston wins their 28th championship, then they will really be better than the Yankees." Although that's pretty mean, it's a logical statement. However, that got me thinking: which team really is better: the Boston Red Sox or the New York Yankees? So, in this post, I will finally be answering this age-old question the only way I know how: historical facts! And yes, the Yankees do have the most World Series wins out of any MLB team with 27, but I'm judging this contest on different criteria.

Category One: Overall Winning Percentage
The Red Sox have been around since 1901 and the Yankees have been around since 1903, so they have played relatively the same amount of games (of course, there are always tiebreakers and rain outs and stuff like that). With that being said, out of 17,742 games played in the franchise's history, the Red Sox have won 9,130 of them. Their overall winning percentage is .515. The Yankees have played in 17,454 games and have won 9,890 of them for a total winning percentage of .567. After one category of judging, the score in the contest is 1-0, New York.

Category Two: Head-to-Head Overall Record
There have been 2,138 meetings between the two storied franchises, but which team has won more of these head-to-head games? Well, the Red Sox have won 972 of them, there have been 14 ties, and the Yankees have won the remaining 1,152 games. The Yankees are building their lead in the contest, with the score 2-0 after two categories.

Category Three: Hall of Famers
Although this category seems a bit obscure and not needed, I think it's very necessary to see which team has brought up the most stars who now reside in Cooperstown. There are 12 ballplayers in the Hall of Fame who were inducted in as Red Sox, including stars like Ted Williams and Carl Yastrzemski. On the other hand, there are 22 Yankees Hall of Famers, including Lou Gehrig, Joe DiMaggio, Mickey Mantle, and Babe Ruth. (Yes, Ruth did go in as a Yankee and not as a member of the Red Sox.) With the contest now at 3-0, New York, the Yankees only need to win one more category to win the whole contest.

Category Four: Head-to-Head Playoff Matchups
Boston and New York have squared off in the postseason in 19 games in three playoff series. The first series was the 1999 ALCS, in which the Yankees beat the Red Sox 4-1 and eventually won the World Series against a former Boston team, the Atlanta Braves. In the 2003 ALCS, it took seven games and a dramatic walk-off homer by Aaron Boone in Game Seven for the Yankees to send the Red Sox home. In the 2004 ALCS, the Red Sox came back from a three games to none deficit and won the series, four games to three. The '04 Sox eventually won their first World Series since having sold Babe Ruth to...the Yankees! However, despite this dramatic win for the Sox, the Yankees won two out of the three playoff series that the two teams have participated in, which means only one thing: the Yankees win the contest, 4-0, proving once and for all that they are better than the Red Sox. 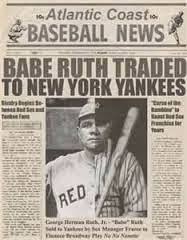 I'm sorry Red Sox fans, but facts are facts and you really can't argue with them. Anyway, thanks for reading this post. Do you agree with it? Write your opinions in the comment section below. I hope you enjoyed this post and check back soon for more of "all the buzz on what wuzz."
Posted by Matt Nadel at 6:11 PM