Other than the Yankees and Red Sox, there is one other big rivalry in Major League Baseball: the Dodgers and the Giants. With that being said, it's time to find out which of these two NL West teams is better! How will I judge this contest, you ask? The categories will be the same as my last "Which Team Is Better" post, which compared the Red Sox to the Yanks, except for the "Head-to-Head Playoff Matchups" category because the two teams have never faced off against each other in October. So, without further delay, which former New York team is more supreme? Let's find out. 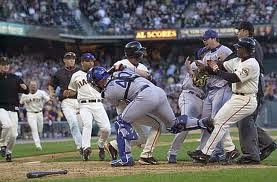 Category Two: Head-to-Head Overall Record
LA and San Francisco have faced off against each other in the regular season in a total of 2,404 games. In those games, there have been 17 ties, 1,179 Dodger wins, and 1,208 Giants wins. The Giants are pulling away in the contest and now lead 2-0. One more point and they win this contest.

Category Three: Hall of Famers
Like I mentioned in the BOS vs. NYY post, this category is very important because it's necessary to see which team has brought up the most stars who are now forever cemented in Cooperstown. There are 14 Hall of Famers who represent the Brooklyn/Los Angeles Dodgers, including Sandy Koufax, Jackie Robinson, and Roy Campanella. On the other hand, there are 23 Hall of Famers who represent the New York/San Francisco Giants, including stars like Willie Mays and Christy Mathewson. There are more Giants HoFers than Dodgers HoFers, which means that the Giants win the contest, 3-0, and are therefore better than the Dodgers.

Don't feel sad, Dodger fans. Facts are facts and you really can't argue with them. Anyway, I hope you enjoyed this post. Which team do you think is better? Leave your thoughts in the comment section below. Thanks for reading and check back soon for more of "all the buzz on what wuzz."
Posted by Matt Nadel at 10:02 AM