The Predecessors to Mariano Rivera 1/10/14

Sadly (for Yankee fans) Mariano Rivera has finally called it quits after playing 19 seasons in the Bronx. In honor of him, I want to talk about other great relievers in Yankee history.

Johnny Murphy
Murphy was one of the first relievers in the live ball era and he did a pretty good job at his job. Nicknamed the Fireman for being able to put out the opposition's fire, Murphy led the AL in saves four times and games finished once. He only totaled 107 career saves, but all Yankee fans from the 1930s and 1940s remember him. 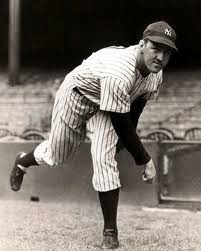 Luis Arroyo
I recently watched a documentary on the greatest teams in baseball history and the 1961 Yankees were in at number nine. It was noted in the documentary that their pitching was excellent. One of their excellent pitchers that year was Luis Arroyo, who had an AL-leading 29 saves, 54 games finished, and 65 game appearances. To top it all off, he also won 15 games with a 2.19 ERA! Now, the rest of Arroyo's career isn't so spectacular, but I wanted to highlight this excellent year of his.

Sparky Lyle
I'm sure a lot of you middle-aged New Yorkers have at least heard of this guy. He played in mainly the 1970s and saved 238 games in his career, leading the AL in this category twice. He also won the Cy Young Award in 1977 when, as a reliever, he won 13 games and finished a total of 60, while appearing in 72 games (the 72 games appeared in and 60 games finished both led the AL for that year). Another important stat to note is that Sparky's career ERA was 2.88, better than Hall of Famers Bob Gibson, Kid Nichols, and Don Drysdale.

Well, those are some other good relievers in the Yankees past, but none of them were better than Mo. We'll miss you, Sandman. Anyway, thanks for reading this post. I hope you enjoyed it and check back in a few days for more of "all the buzz on what wuzz."

P.S. Make sure to check out my new video that I posted on YouTube. It's me playing one of my favorite video games ever and I think it's pretty entertaining. Click right here to watch the video.
Posted by Matt Nadel at 8:06 PM