Today I want to talk about a very controversial subject in baseball history: Pete Rose. Rose is the all-time career leader in games played, at-bats, plate appearances, and most notably, hits. However, he is banned from the Hall of Fame. Why?

Well in baseball, it is illegal to gamble on games. During his career, Charlie Hustle bet on his teams to win ballgames. He was officially banned by the BBWAA in 1991 and, as of now, is not allowed to be elected into the Hall. However, this decision has been argued over between many baseball fans and many of them think that he should be allowed in Cooperstown. I, however, am on the fence in agreeing with the BBWAA's decision and here's why.

Yes, it is illegal in baseball to bet on games, but it's not like he was betting against his team. At least he didn't throw the games he played in like the Black Sox in 1919. However, because he gambled for his team to win, one can say that he was trying hard to win games for the money, not for the love of baseball. A true Hall of Famer plays for the love of America's pastime. In Rose's case, it seems he was playing for the money rather than because he loved managing and running the basepaths and sliding headfirst into bases.

Another very important thing to note about Charlie Hustle is the team he played/managed for when he placed the bets. When he bet on games as player/manager of the Reds from 1985-1987, his teams were expected to do well and they finished in second place in all three years, with him wagering at least $2,000-$10,000 a day. He probably won more money than he lost because of how well his squads did. This brings up the question of whether or not Pete would have been banned if he had managed a bad team, like the Indians (no offense to Clevelanders) and bet on them to win? The answer to most members of the BBWAA is still probably a resounding yes, but think about this for a second: what if because he managed a team not expected to win, he managed extra hard to make sure they won (so he wouldn't lose money on the bets)? Would he still be banned for losing money? In my opinion, I think he still would have been banned, because he broke an MLB rule. Even if you are one of the most famous people in baseball, no rules will be bent in your favor.

So what do you think? Should Pete Rose stay banned from the Hall of Fame up in Cooperstown? What would have happened if he had managed a bad team? Leave your answers to any of the questions I asked in this post in the comment section below. Thanks for reading this post. I hope you enjoyed it and check back in a few days for more of "all the buzz on what wuzz." 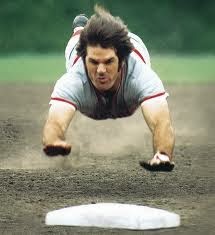