I'm going to do something that I've never done before on Baseball with Matt: I'm going to analyze a poem! But don't worry; the poem is about baseball. This poem is probably my favorite, because it captures the description of a player's entire personality and career in only a few lines. I will first give you the poem to read. Then, below the poem, I will retype each line again and in between some of the lines, I will write my interpretation of those lines in bolded print. So, without further ado, here is To Satch by Samuel Allen.

Sometimes I feel like I will never stop
Just go on forever
Till one fine morning
I'm gonna reach up and grab me a handfulla stars
Swing out my long lean leg
And whip three hot strikes burnin down the heavens
And look over at God and say
How about that!

This poem is about Hall of Fame pitcher Leroy "Satchel" Paige. You'll understand why if you read the next paragraph.

Sometimes I feel like I will never stop
Just go on forever
Satchel Paige played his collective baseball career in parts of five decades. He played the last game of his career on September 25, 1965 with the Athletics at the age of 59!
Till one fine morning
This line is talking about his retirement and his enshrinement into the Baseball Hall of Fame in 1971 via the Negro Leagues Committee. A lot of Negro Leaguers said that he was the best pitcher around, which is why he was voted into the Hall.
I'm gonna reach up and grab me a handfulla stars
Sadly, although his career basically lasted forever, Paige's life did not, as he passed away on June 8, 1982. Him grabbing a "handfulla stars" is symbolic for the Hall of Fame legend ascending to heaven.
Swing out my long lean leg
Satchel's pitching motion featured a high leg kick, kind of like Hall of Fame pitcher Warren Spahn.
And whip three hot strikes burnin down the heavens
At the beginning of his career, Satchel threw flaming fastballs for most of the time, but after an arm injury in the late 1930s, Paige was forced to pitch more curveballs and changeups. By the end of his career, he was throwing almost ever pitch known to man, including the eephus pitch.
And look over at God and say
How about that!
In this line, it seems that Satchel is commenting on the fact that he can still pitch well and he can probably even pitch better than God. This is due to his cocky and enthusiastic personality that brought him many acquaintances and many enemies during his career. However, Satchel loved the game of baseball, so friends or foes didn't really matter to him, as long as he could keep on pitching. 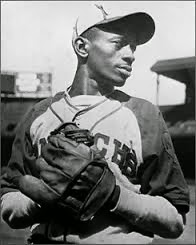 
Well, that's my interpretation of To Satch by Samuel Allen. Is this how you would interpret the poem? Leave your thoughts in the comment section below. Thanks for reading Baseball with Matt's first ever analysis of a poem, and if you have other baseball poems you'd like me to analyze, please leave me a comment. I hope you enjoyed it and check back in a few days for more of "all the buzz on what wuzz."
Posted by Matt Nadel at 12:22 PM