Last Friday, I went to the MLB Network studios in Secaucus, New Jersey! I was there, because I got to be on this show called MLB Hot Stove, with Greg Amsinger and Harold Reynolds (see pic below), both MLB Network analysts. They quizzed me about my World Series knowledge, and we also spoke about the 2012 AL MVP race and other stuff. (Harold, by the way, is a former MLB player who played most of his career for the Mariners, won three Gold Gloves, was a 2x All Star, and won the Roberto Clemente Award.)  Greg and Harold were both super nice guys and made my first live television appearance unforgettable.  I had a great time, and the guys made me feel right at home. If you have not seen it yet, just click here for the video of my appearance. I hope you enjoy it (as much as I did making it). 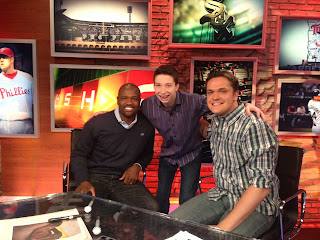 So, you are all probably wondering, how in the world did I get on the heralded MLB Network? Well, it all started with me going to a speech that Greg gave about baseball (which fyi was a great speech). I spoke with him a lot before his speech about my blog, the history of America's pastime and his love of the Cardinals, and he said that maybe one day I could come onto Hot Stove. Sure enough, several weeks later, a very nice woman named Gina Hemphill (see pic below), the Talent Producer for the MLB Network, called and asked if I would like to be on MLB Hot Stove. How could I refuse? 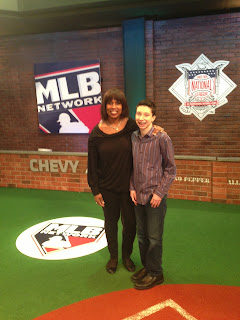 So, I got to the Network on Friday morning (I missed a little bit of school) and met Gina in person. She was super friendly and patient; nice enough to give me, my mom and my dad a tour of the MLB Network! It was awesome! I think the highlight of the tour was Studio 42 (see pic below). The studio is basically a miniature baseball field. It was really cool running around the bases and robbing fake home runs. 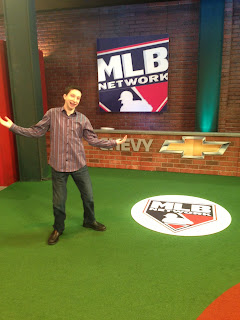 Anyway, there is a lesson behind me telling you about the greatest event that has happened in my life: work hard and always follow your dreams, because you never know what might happen. And now that I've been on the MLB Network, it just makes me want to work even harder to reach my goal of one day becoming a baseball journalist (maybe on the MLB Network) and historian!!

I'D LIKE TO GIVE A HUGE "THANKS AGAIN" TO GREG, HAROLD, GINA, THE PRODUCERS, CAMERA PEOPLE, MAKEUP LADY AND EVERYONE ELSE WHO MADE MY VISIT "THE BEST DAY EVER"!!!!!!

I hope you liked this post and thanks a lot for reading it. Please check back in a couple of days, so I can bring you more of "all the buzz on what wuzz".