I was recently invited to cover the AJHS Baseball Night charity event by Marty Appel, writer of Pinstripe Empire, one of my all time favorite Yankees biographies and baseball books! He also used to be the PR Director for the Yanks, which is really cool. I will be interviewing Marty soon in another post, so stay tuned. Anyway, at the event, there was a silent auction and lots of great things for sale. I even met some really amazing people (besides Marty Appel), like sports broadcaster Len Berman, writer Ira Berkow, and retired player Ron Blomberg! Speaking of one of the most key figures in baseball history, I got to interview Ron! If you don't know about Ron, here's a summary:

Although he didn't play long, Ron Blomberg is one of the most important figures in baseball history. Why? He was the first DH in baseball history! A DH (designated hitter) doesn't field, a DH just hits. Anyway, Blomberg accomplished this feat on April 6, 1973 in a Yankees uniform at Fenway Park against the legendary Luis Tiant. Ron walked with the bases loaded. In his career from 1969-1978 (he missed 1970 because of the minors and 1977 because of injury), with New York and the White Sox, he batted .293 with 52 homers and knocked in 224 RBIs. Also, he was one of the greatest athletes of his time in high school, having been an All-American in baseball, basketball and football. Well, that's basically all there is to know, so lets get to the interview. By the way, this was my first live interview in the history of Baseball with Matt!

Matt: Why did you choose baseball over basketball and football?
Ron: I was drafted by the Yankees and my whole family was in New York.

Matt: Being a DH expert, would you vote Edgar Martinez into the Hall of Fame?
Ron: Definitely. He's the greatest DH in the history of the game.

Matt: Were you nervous when you came to the plate as the first DH in baseball history and had to face the intimidating Luis Tiant?
Ron: Heck no! He should've been afraid of me!

Matt: Who did you like to hit against the most during your career?
Ron: Nolan Ryan, Jim Palmer and Gaylord Perry.

Well, that's the interview. Thanks to Ron for agreeing to let me interview him and to Marty Appel for inviting me to cover the really fun event. Also, make sure to check out Ron's website: ronblombergyankees.com. Hope you enjoyed the interview and thanks for reading this edition of "all the buzz on what wuzz". 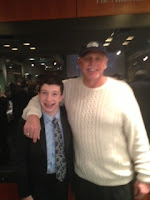