I have another interview for you! This one is with New York Yankees pitching great: Ron Guidry! Some of you probably have no idea who he is, which is why I will tell you all about the "Gator" in the next paragraph. 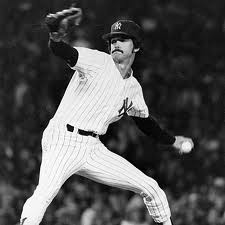 Matt: What sports did you play and watch as a kid?
Ron: I played baseball as a kid, but in high school I did track because there was no baseball team. I would watch any sport that was on TV.

Matt: Who was the toughest hitter you ever faced? If you were to pitch against one player from all of baseball history, who would it be?
Ron: Everybody can be tough during their careers. Every team in the bigs at the time I was pitching had at least one guy who I had difficulty pitching to and getting out. But, I think the hardest of them all was George Brett. If I were to face any guy from baseball history, it would be Lou Gehrig.

Matt: What’s your favorite MLB memory?
Ron:  As a kid, you always dream of winning a World Series. So, I would have to say that it was when the Yankees won the 1977 World Series. It was the first Series the Yankees won in about 15 years, so it made New York happy and the players happy as well.

Matt: As a child, were you ever face to face with an alligator in the Louisianan swamps?
Ron:  Sure. I lived in a not-so-swampy area, but when my family went fishing and hunting in the swamps, we would usually come across some.

Matt: How did you get your pickoff move to be so good?
Ron: Whitey Ford helped me a lot. What also helped is remembering the pitch count. Some runners like to run on certain counts, so I just kind of memorized each scenario in my head and I ended up picking off a lot of base runners.

Matt: What was your favorite meal before games?
Ron:  I would usually eat whatever I could get my hands on. If there was a ham sandwich in the freezer, that's what I would eat.

Matt: Since you and Yogi Berra are such good friends, has he ever said a Yogi-ism to you that not too many people know?
Ron: Not really. He has said some funny stuff, but not as funny as his Yogi-isms. We always talk about baseball, so there's usually no: "If there's a fork in the road, take it."

Well, that's the interview. Thanks to Ron for agreeing to let me interview him. And thanks to Joe Howley who runs the PALS charity and to Joni Bronander for helping to arrange the interview. I hope you all enjoyed this interview as much I did conducting it. As always, thanks for reading Baseball with Matt where I'm bringing you "all the buzz on what wuzz".
Posted by Matt Nadel at 6:22 PM