An Interview with the Official Historian for MLB 12/14/12

I just received the answers to the interview questions that I sent to.... John Thorn, the Official Historian for Major League Baseball! Thorn was appointed Official Baseball Historian for Major League Baseball by the Commissioner on March 1, 2011. He has written books like "Treasures of the Baseball Hall of Fame" and "The Hidden Game of Baseball". In June, 2006, he was awarded SABR's (Society of American Baseball Research) top award: the Bob Davids Award. In 2004, Thorn discovered documents that traced baseball back to 1791 in Pittsfield, Massachusetts! That's about 70 years before people say that baseball actually was invented! I think I've said too much about John already, so here's the interview:

Matt: What is your favorite World Series ever?
John: Of the ones I have witnessed in real life, 1960, because of the great upset that a Pirates victory represented and how thoroughly they were knocked around in the three games they lost. I have to mention 1986, too, because of my rooting interest in the Mets and the implausibility of their comeback from the brink of defeat in Game 6, particularly. Game Six of the 2011 Series was an alltime classic, too, as was Game Six in 1975. Of the World Series I have seen in my mind only, I'll go with 1912, the only Series ever to conclude with a final-inning comeback in a final game. There, you asked for one and I gave you five; sue me.

Matt: Who do you think are the three best hitters and three best pitchers in baseball history?
John: Babe Ruth, Ted Williams, Barry Bonds; Walter Johnson, Roger Clemens, Greg Maddux--and not necessarily in that order for either category.

Matt:What do you think are the top three moments in baseball history?
John: Defining moments as singular events, I must eliminate Joe DiMaggio's 56-game hitting streak as well as any season-long performances, or granting of MVP or Cy Young Awards.. 1947: Jackie Robinson integrates the game. 1951: A pennant turns on a single swing of Bobby Thomson's bat. 1975: Carlton Fisk's home run that reminded a nation, at a time when the game seemed to be slipping, of baseball's unique combination of excitement and suspense.

Matt: What is your favorite artifact in the Hall of Fame and what artifact do you wish they had?
John: Favorite artifact: the Gotham Base Ball Club pin of the 1850s. Artifact I wish they had: the Gotham Base Ball Club pin of the 1850s. This pin was lost in the 1990s during one of the Hall's periodic exhibit reconstructions. Here's what I wrote recently about the pin: To give an idea of how large a story a small artifact may tell, and how rich in association it may prove, allow me to tell you of a baseball pin no larger than a dime, along with a common nursery tale. “Three wise men of Gotham went to sea in a bowl,” went the Mother Goose rhyme; “and if the bowl had been stronger, then my rhyme had been longer.” Mother Goose's Histories or Tales of Passed Times was first published in London about 1775, based upon English and French sources, including Charles Perrault’s Contes de ma mère l’Oye (1695). There is more to this tale, but I will stop here for now, fearing that I may try your patience.

Matt: What's your favorite ballpark in baseball history?
John: The Ebbets Field is the lost home of memory for me, as I grew up as a fan of the Brooklyn Dodgers. But the bathtub-shaped Polo Grounds was the greater park. Buck Ewing and Christy Mathewson played there, and that's where Babe Ruth began his glory years with the Yankees. And I saw my first major-league game there, on May 12, 1957.

Matt: How do you suggest MLB get kids more interested in baseball history?
John: Keep the stories alive--the legends spring to life for young people with imagination, like yourself. The game is about so much more than who won and who lost.

Matt: As the official historian for MLB, can you describe what you do on a typical day?
John: There's something to do every day with the Origins Committee and Memory Lab. And I receive many letters, and participate in many research bulletin boards, to "keep up" with newfound events of long ago. The job of MLB's official historian is not merely to know--or know how to find--who did what and when, but to supply the perspective of the past to enhance fans' pleasure in the present. 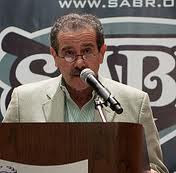 I hope you enjoyed reading the interview. I sure enjoyed doing it.  Thanks again to John Thorn for doing such a great interview!!! He's a really good guy.

P.S. - I recently passed 20,000 page views on my blog and I couldn't have done it without everyone who reads my blog.  So thanks to all of you who read my blog. Lots more good stuff is in the works.
Posted by Matt Nadel at 7:49 AM