I know I promised this a long time ago, but finally, I have the answers to an email interview with Jackie Robinson! Well, kind of. Like the Babe Ruth Interview, I wasn't able to speak to Jackie directly, since he passed away many years ago, but I was able to interview the chief historian of his Foundation and Museum, Yohuru Williams. So, without further ado, here's the interview:


Matt: Jackie was truly a pioneer in baseball and beyond. What further progress do you think still needs to happen?
Yohuru: Jackie would be thrilled with the tremendous progress not only in major league baseball, but also in the other professional sports. As the first four-letter athlete at the University of Los Angeles, Jackie came to appreciate the power athletics has to bring people together. The University as well as the community at large often turned out to watch him compete and his stature as a star athlete allowed him to take a stand on important issues. Today, Jackie would very much celebrate not only the diversity of the game, but its global impact. He would also likely highlight the role of other pioneers such as Roberto Clemente in helping to break barriers and increase baseball’s appeal while remaining committed to a humanitarian mission of interracial cooperation and peace.

Matt: How was Jackie able to stay so focused and ignore all the mean comments that many fans directed at him during and after games?
Yohuru: Although Jackie has been lauded for his resolve in not fighting back against those who said and did mean things to him, it was a struggle. As someone who had experienced the bitter sting of racism, Jackie understood that he bore a tremendous burden. In his autobiography, I Never Had it Made (1972), he recalled the internal turmoil he felt on being asked not to retaliate against those who might treat him badly. “Could I turn the other cheek? I didn’t know how I could do it. Yet I knew I must.” His motivation was clear, “I had to do it for many reasons. For black youths, for my mother, for Rae (his wife Rachel), for myself. I had already begun to feel that I had to do it for Branch Rickey.” Of course, not only was Jackie able to steel his emotions, he remains a powerful example of the importance of civility, and the power of self-restraint.

Matt: Were there any people (living or dead) outside of baseball who Jackie looked to for inspiration?
Yohuru:  Jackie’s first hero was his mother, Mallie Robinson whom he credited with instilling in him a sense of confidence and self-esteem. Jackie Robinson was also a staunch supporter of the Civil Rights Movement and greatly admired many of its leaders, most notably the Reverend Dr. Martin Luther King and NAACP head Roy Wilkins. Jackie was also an admirer of New York Governor Nelson Rockefeller.  A lifelong Republican, Jackie appreciated many of Governor Rockefeller’s moderate policies at a time when the Republican Party was beginning to shed its mantle as the party of Lincoln. Jackie felt that Rockefeller remained steadfast to the Party’s founding ideals and worked with him on various projects. As Jackie recalled of their relationship, “A man like Rockefeller is surrounded by people trying to please and soothe him and I think he appreciated my outspokenness. On several occasions, not always happily, the governor conceded that I was one of the few people close to him who usually spoke up when I thought I had to.” Jackie was also a great admirer of his wife Rachel, whom he remained deeply committed too. In addition to working with Jackie on a variety of humanitarian initiatives, Rachel was an Assistant Professor on the faculty at the Yale University School of Nursing. She also later served as the Director of Nursing at the Connecticut Mental Health Center. Jackie admired her selfless dedication to others and her commitment to education.

Matt: In 1951, when Bobby Thomson hit the "shot heard round the world" against Ralph Branca, what was the reaction in the clubhouse?
Yohuru: “The Giants win the Pennant, the Giants win the Pennant,” the words still carry the bitter pill of disappointment for Dodgers fans.  As you may know, it was the first sports event ever broadcast nationwide. The sense of tension was great as Ralph Branca took the mound to pitch to Bobby Thompson who had homered off him just two days before. The reaction in the clubhouse is very much what one would expect -- sheer and utter disbelief combined with disappointment. Nevertheless, Jackie and his teammates were professional. Jackie and Ralph Branca had a great relationship. On opening day of his Dodger rookie season after Jackie had received death threats, Ralph made it a point to sit by Jackie. He also was the first player to take the field and stand with Jackie after other members of the team refused to play. Jackie respected Ralph as a competitor and as a friend. He and the other Dodgers used their disappointment as motivation. In the years following, the fateful pitch rumors circulated that the Giants had actually stolen the sign, by using a telescope. A recent book by Josh Prager, Echoing Green (2006), documents the scandal. Jackie, Ralph and the other Dodgers played the game with a deep sense of integrity, an integrity that they did not lose in defeat.

Matt: Can you please tell us something about Jackie that few people know?
Yohuru: In addition to his career in baseball, Jackie was a prolific letter writer. In addition to writing regular opinion pieces for various newspapers, including the New York Post and the New York Amsterdam News, Jackie corresponded with a number of politicians and civil rights leaders on a variety of issues. Jackie explained in a memorandum to Robert Douglas, the manager of Nelson Rockefeller’s presidential campaign in May of 1968, “As an ex-athlete I am always aware that a good offense is the best defense and when you are behind you pull out all the stops and go with your strength.” I imagine few would suspect that Jackie was as artful and prolific with a pen as he was with a bat.  Michael Long has edited a fantastic book of Jackie’s correspondence entitled First Class Citizenship: The Civil Rights Letters of Jackie Robinson, which is a must-read for anyone interested in this aspect of Jackie’s post-baseball life. 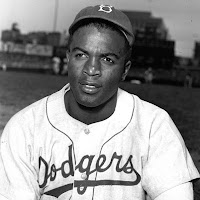 I hoped you liked the interview. Special thanks to Yohuru Williams for doing such a great job!! If you want, you can check out another post by me about Jackie breaking one of the most important barriers in all of sports. Thanks for reading!