Right now, I'm hanging out with my Canadian friends, Zach and Sam. They're jammin' it up with Zach on guitar and Sam on drums, so I decided to write a post on the only current team that is located in the country above the United States. That team is the Toronto Blue Jays.

The Blue Jays were created in 1976 and are based in Toronto, Canada. They have won two World Series in their history, but like a lot of the teams I've blogged about (except for the Dodgers of the '50s) they don't have the best history. Nonetheless, they have had some good players, like Roberto Alomar, Paul Molitor and Rickey Henderson. They didn't have those players in the beginning of the franchise, so they didn't do too well until 1983, when they started an 11-year streak in which they won more games than they lost. They won numerous Eastern Division titles, but were never able to get to the World Series. That all changed in 1992. The team got to the team's first World Series appearance and faced the pitching juggernaut Atlanta Braves. It was a very exciting World Series, even down to the last inning. Let me explain what happened in the last inning of the 1992 World Series.

The Blue Jays entered Game Six in Atlanta, leading the series three games to two. After nine innings of baseball, the score was tied 4-4. In the top of the eleventh, old-timer Dave Winfield slapped a double down the left field line, scoring the eventual World Series-winning run, as the Braves went quietly in the bottom of the eleventh. The Blue Jays and the future Hall of Famer Winfield both won their first World Series.

Winfield went to Minnesota after the 1992 Series, but he was replaced by another future Hall of Famer, Rickey Henderson. He and fellow teammate, Paul Molitor, another future Hall of Famer, helped the Jays get to their second straight Fall Classic, where they faced the Philadelphia Phillies. (Click here for a cool blog about the Phils.) Like the year before, the Jays entered Game Six, leading three games to two. Entering the bottom of the ninth at the Skydome, home of the Jays, the Phillies were leading 6-5 and were on the verge of tying the series and forcing a seventh game. Sadly (for Phils fans), Toronto put two on base with one out. Joe Carter was the batter. He faced Mitch Williams, the Phillies closer nicknamed "Wild Thing". On a 2-2 count, Carter hit a shot that sailed into the left field seats for a walk-off, game-winning, World Series-winning homer!!! It was the second time ever that a World Series ended in a homer, but unlike Bill Mazeroski in 1960 for the Pirates (against the Yankees), Carter's homer came with his team trailing (and thankfully it wasn't against my Yankees this time). 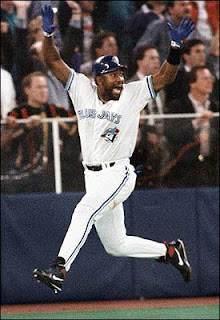 Not much has happened the last 20 years in Blue Jays history, but Toronto will always be remembered as the best Canadian baseball team ever. (Sorry Montreal, but the Expos just weren't good.) Shutout to Zach and Sam for inspiring me to write this post. Thanks for reading!
Posted by Matt Nadel at 3:54 PM