As some of you might know, I've grown up in New Jersey for about 95% of my life. Because of this, I've been a New Jersey/Brooklyn Nets fan since I was around 8, so you can imagine how excited I was this past NBA season to see my Nets make the playoffs for the first time in what seemed like forever. Every time I describe the current Nets to other people, I always call them a collection of "cult players," not to say that they all take part in pagan rituals, but rather that following the team is very niche and esoteric, in a way.

The very best example of this phenomenon in baseball right now is the Minnesota Twins, who, thanks to some insane seasons from many not-generally-insane players, have vaulted to the top of the AL Central and are tied for the best record in the American League as of the writing of this post. That being said, however, this isn't the first time that a Twins team has unexpectedly been great. Let's jump back to 1987 to talk about the first team to bring a World Series trophy to the Land of 10,000 Lakes.

For starters, the 1987 Twins weren't actually great; they only finished with a record of 85-77, which somehow beat the rest of the AL West. If they were in the AL East, they would've come in a distant fifth. That being said, though, their lineup that year was pretty interesting. Kirby Puckett, the only Hall of Famer in the batting order, collected a league-leading 207 hits to go along with his .332 batting average, 28 home runs, and 99 RBIs; first baseman and lifelong Twin Kent Hrbek contributed 34 homers and 90 RBIs of his own; third baseman Gary Gaetti topped 30 homers and 100 RBIs; and right fielder Tom Brunansky hit 32 bombs and knocked in 85 runs. Besides Puckett, I'm sure that most of you younger folk don't recognize the other three names I just mentioned. On defense, the pitching staff wasn't exceptional, but did feature Hall of Famer Bert Blyleven and All Star Frank Viola, along with should-be Hall-of-Fame closer Jeff Reardon.

But the best explanation for why the Twins were so good in 1987 was their home stadium. The Twins went an astounding 56-25 while playing in the homer-happy, boisterous Metrodome, but only won 29 of 81 contests outside of the Gopher State. After a five-game drubbing of the Tigers in the ALCS, home-field advantage was all the rage in the World Series against the Cardinals. The 1987 World Series was the first seven-game Fall Classic in which the home team won every game. The fact that the Twins had home-field advantage in the series was the only reason that they won, but they won nonetheless, bringing the franchise its first championship since 1924 (the Washington Senators moved to Minnesota and became the Twins in 1961).

Much like the 2018-2019 Nets, the 1987 Twins had absolutely no business being in the playoffs, but unlike the Nets, made the most of their opportunity. The '87 Twins (and the 1991 Twins, for that matter) prove that not every winner in sports needs to be a dynasty. Sometimes, it just helps to have a Cinderella season. Thanks for reading this post and I hope you enjoyed it. Check back soon for more of "all the buzz on what wuzz." 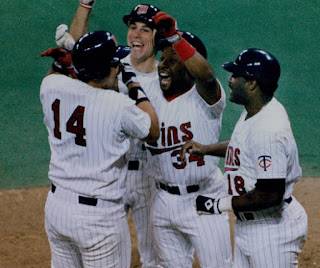