Some major news just came out yesterday about how the Rays might play some of their regular season games in Montreal. There is no further information about how many games the Rays will play in the province of Quebec or how soon this move could happen, but I'm here, as always, to give a historical breakdown on this huge MLB development.

The Rays have only attracted over 20,000 fans per game in their home stadium, Tropicana Field, for four years in the club's 20-year history. In the year they went to the World Series (2008), they averaged 22,370 fans per game at the Trop. To put that into perspective, the Cardinals haven't dipped below 30,000 fans per game in a season since 1995. In other words, the Rays have a huge attendance problem and have not been able to shake this problem since their inception.

Meanwhile, the Montreal baseball fans that are still left have been yearning for a new team ever since the Expos moved from Canada to our nation's capital and renamed themselves the Washington Nationals. However, it should be noted at this point that the Expos, leading up to their move to D.C. before the 2005 season, had some of the worst attendance numbers anyone could imagine, even worse than Tampa's now.

Nonetheless, the Expos' attendance woes of the 1990s and early 2000s had a lot to do with how the team performed and how the front office dealt with that poor performance. The Nationals, with the help of their excellent teams of the past, have posted pretty good attendance numbers over the last several years, even before the Bryce Harper years. So, the real issue that the Rays face right now is a bad market because they are one of baseball's best teams now and can't seem to bring fans to St. Petersburg. No offense, Rays fans.

The Rays are notably one of the most creatively-managed teams in baseball. Joe Maddon famously popularized fielding shifts, while Kevin Cash has implemented the opener rather successfully. The only reason they have to be so savvy is because they don't have the money to bring in big-name stars. With the analytical attitude that they already possess, the good lineups they put out every day over the last year-and-a-half, and the excited Montreal baseball fans, the Montreal Rays (or Expos 2.0) would be a great idea and, personally, I think they should permanently move to Montreal. 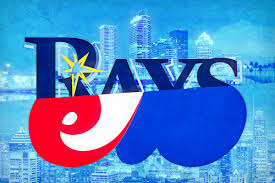 What are your thoughts on this news out of Tampa? Is the Trop really as bad as people make it out to be? Let me know in the comments section below. Thanks for reading this post and I hope you enjoyed it. Check back soon for more of "all the buzz on what wuzz."
Posted by Matt Nadel at 11:36 AM