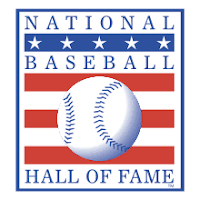 The Hall of Fame is a wonderful place that has inspired some of my best blogging. So thank you Mr. Clark for founding it. And a very happy birthday, HoF! Thanks for reading this post and I hope you enjoyed it. Check back soon for more of "all the buzz on what wuzz."
Posted by Matt Nadel at 9:17 AM