Two weeks ago, arguably the best contact hitter of the 1990s celebrated his birthday. No, this wasn't Craig Biggio, Tony Gwynn, Roberto Alomar, or Ken Griffey Jr. Those Hall of Fame hitters might be high on the list of hitters with the most hits of the last decade of the second millennium, but no one had more hits in the '90s than Mark Grace.

Who's Mark Grace, you ask? Well, he was a longtime first baseman for the Cubs and Diamondbacks who happened to have been good at baseball. Grace played from 1988-2003, averaging 153 hits per season over that 16-year span. The three-time All Star batted .303 lifetime, winning three Gold Gloves on the right side of the diamond. And yes, as I mentioned before, Grace led all major league hitters in the 1990s with 1,754 hits, seven more hits than the hitter in second place, Rafael Palmeiro. 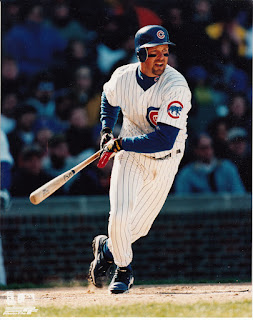 When Grace became eligible for Hall of Fame induction in 2009, he received 4.1% of the vote, eliminating him from future ballots (you have to get at least 5% to stay on). Now, I don't believe that Mark Grace should've been a Hall of Famer on his first try, but 4.1% for the 1990s hits king seems a bit low.

Here's the thing: generally, when a hitter doesn't get to 3,000 hits and plays less than 20 years, the hitter has to be well on his way to 3,000 by the time he retires. Vlad Guerrero is a good example, purely just based on his hits numbers. But Grace, as mentioned before, only averaged 153 hits in 16 seasons, while Vlad averaged 162 hits over 16 years.

Nonetheless, I still think that Mark Grace is a Hall of Famer. In a time when everyone was pounding balls over the fence, Grace found an alternative way to drive in runs, 1,146 runs to be exact. I'm not saying that he's a better hitter than Biggio, Gwynn, Alomar, or Griffey, but Mark Grace is the 1990s hits king and they aren't.

Thanks for reading this post and I hope you enjoyed it. Check back soon for more of "all the buzz on what wuzz."
Posted by Matt Nadel at 9:53 AM