The team that represented the American League in my favorite World Series (1993: Toronto Blue Jays vs. Philadelphia Phillies) was filled to the brim with All Stars like Joe Carter and Jack Morris and Hall of Famers like Rickey Henderson and Paul Molitor. However, perhaps the most important player on the team that season was the AL batting champion of 1993: John Olerud!

Olerud played for Blue Jays, Mariners, Mets, Red Sox, and Yankees from 1989-2005. In his 17 years, he had 2,239 base hits, with 255 of those hits going out of the park.The two-time All Star first baseman was really known for his batting average. He batted over .300 four times and his lifetime batting average was a solid .295. In 1993, Olerud led the AL in doubles (54), batting average (.363), on-base percentage (.473), on-base+slugging percentage (1.072), and intentional walks (33). He placed third in the MVP voting, but he was able to lead his '93 Jays to the Fall Classic. In the six games, John went 4 for 17 with a homer and two RBIs. Another cool note about Olerud was that he went straight from Washington State University to the Majors without playing a single game in the Minors. He is one of 21 players to do so in Major League Baseball history. 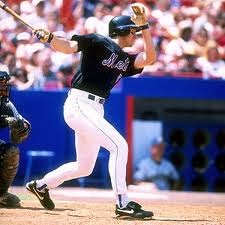 Although the Big Rude (one of Olerud's nicknames) only got 0.7% of the Hall of Fame ballot in 2011, he was still inducted into the National College Baseball Hall of Fame in 2007. Anyway, thanks for reading this post. I hope you enjoyed it and check back in a few days for more of "all the buzz on what wuzz."
Posted by Matt Nadel at 10:40 AM