The 1984 Detroit Tigers won an astounding 104 games during the season and won the AL East by a whopping 15 games over the second place Toronto Blue Jays. The team had some amazing players. Pitcher Jack Morris, the pitcher with the most wins in the 1980s, went 19-11 with a 3.60 ERA. Detroit right fielder Kirk Gibson hit 27 homers and also stole 29 bases. My birthday buddy, Trammell, batted .314, 25 points higher than the next Tiger. However, perhaps the best player on the team was reliever Willie Hernandez. The Cy Young Award winner appeared in 80 games, saved 31 of them, finished 68 of them, and had an ERA of 1.92. All of the players I just listed were All Stars (except for Gibson) in 1984, as well as catcher Lance Parrish, who led the team in home runs and RBIs, second baseman Lou Whitaker, who had 206 hits, and center fielder Chet Lemon, who was known as one of the best defenders of the time. They were also managed by Hall of Fame manager Sparky Anderson. No wonder they were so good.

The 1984 American League Championship Series was a sweep, with the Tigers winning all three games over the Kansas City Royals. The World Series would basically be as anti-climatic, but with and extra kick of "sorry Padres" at the end. Entering the bottom of the eighth of Game Five at Tigers Stadium, Detroit had a one run lead over the San Diego Padres, leading the Fall Classic 3-1. With two men on and one out, Dick Williams elected to walk Kirk Gibson. Hall of Fame reliever Goose Gossage said otherwise. Bad move, Richard. Gibson proceeded to hit a three-run home run which essentially clinched the Series (see his reaction below). Hernandez finished off the Pads in the ninth and the Tigers won their fourth World Series in franchise history. 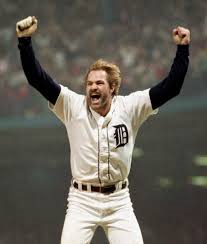 The best part about the 1984 World Series? My birthday buddy won World Series MVP, hitting two homers in the Series and driving in six runs! Anyway, thanks for reading this post. Let me know in the comments if you have a Hall of Fame birthday buddy or someone born on your birthday that you think should be in Cooperstown. I hope you enjoyed this post and check back in a few days for more of "all the buzz on what wuzz."
Posted by Matt Nadel at 8:50 PM