If you were to hear the words New York baseball team, you would think about the Yankees. However, before 1957, two other teams played in New York (by the way, the Mets weren't even created in 1961), the New York Giants and the Brooklyn Dodgers . During the 1940s and 1950s, the Giants were good, but the Dodgers were unbelievable! Stars like Jackie Robinson, Pee Wee Reese, Duke Snider, Gil Hodges, Clem Labine, and Preacher Roe helped the Dodgers to win seven pennants and one World Series championship (1955) from 1940-1957. They were called "The Boys of Summer" or "Dem Bums". Unfortunately for the Dodgers, all the World Series they played in were against the Yankees who were pretty awesome. So when they finally won it all in 1955, it was huge, and the whole Borough of Brooklyn celebrated. 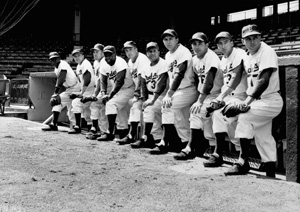