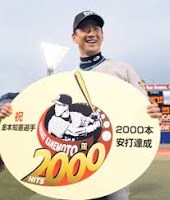 The Golden Players Club is exactly that: a club. Members of this club participate in offseason events, like charity golf tournaments and volunteering for the Red Cross. However, some former Japanese players have declined membership, like Hiromitsu Ochiai, who didn't want to be part of the organization because Kaneda and other founders criticized him throughout his career. That being said, it is still an honor to become a member, much like it is to be a member of the MLB's 500 home runs or 300 wins clubs.

Should the MLB have something like this? If so, what would be your benchmarks? Would guys with the initials BB, SS, MM, or RC be welcomed into your club with open arms? Leave your thoughts in the comments section below. Thanks for reading this post and I hope you enjoyed it. Congrats to all of the 2019 Hall of Fame inductees, by the way, and check back soon for more of "all the buzz on what wuzz."
Posted by Matt Nadel at 10:22 PM