Now that the World Series is officially over (congrats, Astros), it's time to talk about end-of-season MLB awards! With that being said, here are my predictions for the MVP, Cy Young Award, Rookie of the Year, and Manager of the Year in each league.

AL MVP: Aaron Judge (Yankees)
Why? No offense to Jose Altuve and his league-leading batting average, but as has been seen with Mike Trout's numerous MVPs, the MVP award usually comes down to WAR (wins above replacement) as a tie-breaker. Judge and Altuve are the front-runners for this award and have plenty going for them in different categories; Altuve is your typical modern contact hitter/speedster, while Judge is Mickey Mantle without the batting average. The bottom line is that this decision for MVP should come down to WAR, a category Judge topped in the AL at 8.75, compared to Altuve's 7.94. Both are extremely proficient run-producers, but Judge consistently carried the Yankees in a year when they were supposed to stink. To simplify, when Judge was hot, so were the Yankees. 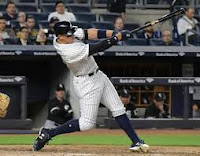 NL MVP: Paul Goldschmidt (Diamondbacks)
Why? This is a very awkward decision for me. Originally, I had Nolan Arenado winning this award, but APPARENTLY, he will remain the most underrated hitter in baseball by not being selected to be in the top three for this award category. With that being said, Paul Goldschmidt still had an insane year that eventually helped his team to the playoffs. Sure, Joey Votto and Giancarlo Stanton had arguably better years in certain statistical categories (batting average and home runs, respectively), but Goldy was the best all-around AND Votto and Stanton didn't get to taste October because of the subpar teams for whom they play. That's why considering WAR in the 2017 NL MVP conversation is misleading; Votto and Stanton have the highest WARs in baseball, but that's only because they were the only producers for their teams. Goldschmidt plays on a stacked Diamondbacks lineup and still posted a top-ten WAR in baseball, not just the National League.

NL Cy Young: Clayton Kershaw (Dodgers)
Why? Not to sound repetitive, but no offense to Max Scherzer, but your league-leading strikeout total won't win you the Cy Young Award. Kershaw led the NL in wins (18), ERA (2.31), ERA+ (180), strikeouts-to-walks ratio (6.73) and came in second in the NL in WHIP (0.949). Seems like another Cy Young season for Kershaw to me.

AL and NL RoY: Judge and Cody Bellinger (Yankees and Dodgers)
Why? Both of these decisions should be unanimous. Judge has the record for most rookie home runs in baseball history (52), while Bellinger holds the same record in National League history (39). Case closed.

AL Manager of the Year: Paul Molitor (Twins)
Why? Who knows how Molitor got this team to the playoffs, but props to him for doing it. No team before the 2017 Twins had made the playoffs just a year after losing 100 or more regular season games. Honestly, I think this team is a major fluke and will be back in the basement of the AL next year. However, for the time being, nice job, Paul. I guess now I know why your nickname is "The Ignitor."

NL Manager of the Year: Torey Lovullo (Diamondbacks)
Why? The D-Backs went from posting their worst team ERA in franchise history in 2016 (5.09) to posting their best in 2017 (3.67). Lovullo's emphasis on small ball, even though the team can really smack the ball around, led to one of the best run-preventing and baserunning teams in baseball in 2017. Regarding baserunning, the D-Backs ranked second in baseball in taking the extra base (45%) and first in least amount of outs made on the base paths (35).

Do you agree with my picks? Let me know your thoughts in the comments section below. Thanks for reading this post and I hope you enjoyed it. Check back soon for more of "all the buzz on what wuzz."
Posted by Matt Nadel at 8:42 AM