A couple of weeks ago, I planned a trip to the Bronx to see a Yankees game. Looking at the dates available, I concluded that the best day to go was April 15th, so I bought tickets for that Yankees game where they would host the Cardinals. I didn't think anything of the day's significance until I turned on the television the morning of the game and remembered it was Jackie Robinson Day.

Jackie Robinson Day is celebrated every year on April 15th all across the MLB to honor Jackie Robinson breaking the color barrier on that date in 1947. On that day, Robinson didn't do much at the plate for the Dodgers at Ebbets Field, but he did a lot for the game of baseball. Without him and the perseverance he exuded during his playing days, so many of the MLB's best would've been unable to play America's pastime at the professional level. Prior to that day in 2017, I had never experienced a special day on the MLB calendar, days that include Mothers' Day or Memorial Day. It was awe-inspiring to see all of the players on each side don Robinson's now-retired number 42 to pay homage to the trailblazer. 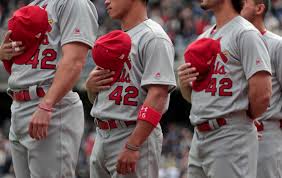 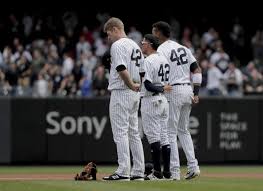 There were two really cool things I noticed as the game unfolded. First of all, because the Cardinals were the away team, they batted first, and the first batter in their lineup was Dexter Fowler. Just last October, Fowler became the first African-American to bat for the Chicago Cubs in the World Series, because the last World Series the Cubs made took place two year prior to Robinson's historic day. I thought that was a very appropriate and classy lineup idea by Cardinals' manager Mike Matheny, whether he knew what he was doing or not. Second, that game featured the most possible combined World Series rings between two teams, the Yankees with the most at 27 and the Cards with the second-most at 11. But despite this, these two historically legendary franchises took part in a tradition shared by teams that haven't even been to the World Series: honoring a true baseball star in Jackie Robinson. 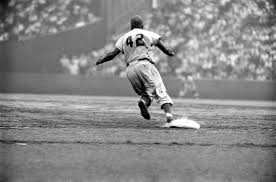 Thank you, Jackie, for all that you've done for the game. Also, the Yankees won that day and extended their winning streak to six games, so that's good. Thanks for reading this post and I hope you enjoyed it. Check back soon for more of "all the buzz on what wuzz."
Posted by Matt Nadel at 4:59 PM