The Tampa Bay Rays took on the Cuban national baseball team the other day in an exhibition game, the first MLB game in Cuba since 1999. In honor of such a momentous occasion, here are my top five favorite Cubans in baseball history:

Number Five: Yoenis Céspedes
Why? Although he gets traded a lot, this power-hitting outfielder was the sole reason for the Mets' 2015 NL pennant run. He has averaged 26.5 homers and 91.75 RBIs per season in four years in the MLB. He's also got a very impressive collection of cars.

Number Four: Luis Tiant
Why? The man with the crazy windup was one of the best foreign pitchers of his era, with 229 wins from 1964-1982. The three-time All Star won 20 or more games four times and struck out 200+ batters three times. 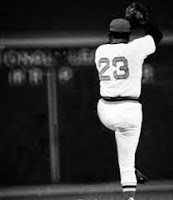 Number Three: Minnie Minoso
Why? He may be more known for his five appearances at 50+ years old, but Minoso is much more than that. One of my grandpa's favorite players ever, the seven-time All Star was the first big Latin MLB star and appeared in the MLB for the first time right after Jackie Robinson broke the color barrier. The speedster led the league in stolen bases and triples three times apiece and batted an astounding .298 lifetime.

Number Two: Bert Campaneris
Why? One of the catalysts for the A's three championships from 1972-1974, Campaneris made a name for himself on the base paths, leading the league in steals in six seasons (four of them were consecutive). His 649 reported acts of larceny are 14th on the all-time list and he always seemed to be in the MVP race.

Number One: Tony Pérez
Why? It's very simple: he's the only Cuban-born MLB Hall of Famer. The seven-time All Star was the first baseman for Cincinnati's "Big Red Machine" of the 1970s and Philadelphia's "Wheeze Kids" of 1983. From 1964-1986, Pérez batted .279 lifetime with 379 homers and 1,652 RBIs. He was inducted into the Hall of Fame in 2000. And I even interviewed him! Here's the link to my interview with Tony Perez. 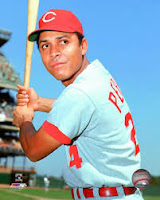 Do you agree or disagree with my picks? Leave your thoughts in the comments section below. Anyway, thanks for reading this post and I hope you enjoyed it. Check back soon for more of "all the buzz on what wuzz."
Posted by Matt Nadel at 8:32 AM