Who's ready for the first ever Baseball with Matt interview with a former softball player? I hope you are, because today I have an interview with Jennie Finch, the best softball player ever according to many people! But in case you aren't familiar with Finch's credentials, here's a quick biography on the Olympian.

Finch started playing softball at a young age and hasn't given up the drive since. She played the sport at  La Mirada High School in La Mirada, California and was the captain of the team in her senior season. Finch then went to play ball at the University of Arizona. As a sophomore and junior, she was named an All-American and totaled 119 wins and just 16 losses in her entire pitching college career! Did I mention that her college ERA was 1.08 and her WHIP was a minuscule 0.84?? She also led Arizona to a Women's College World Series championship in 2001.

After college, Finch went on to play with the Nation Pro Fastpitch's Chicago Bandits. She had a great career in Chicago from 2005-2010, posting a career record was 36-8 with a 1.08 ERA! She also helped the Bandits win the 2008 NPF championship.

Most importantly, Finch also participated in two Olympic Games on the Women's Softball team, winning the gold medal in 2004 and the silver  medal in 2008. She didn't allow a single earned run during her Olympic career! in fact, her overall U.S. national team record was 36-2, with 19 shutouts,  397 strikeouts in 239 innings pitched,  a 0.42 ERA and a 0.44 WHIP!! How insane is that?! 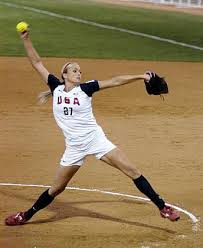 By the way, as you will hear in the interview, Jennie has also written a bestselling, very inspirational book called Throw Like a Girl: How to Dream Big & Believe in Yourself.  The book is a bestseller on many lists and I expect it to be so for a long time, so check it out. 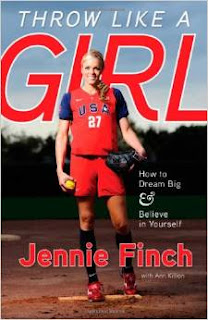 So now that you know a little bit about Jennie Finch, click here to listen to the interview. Thanks so much for listening to it and I hope you enjoyed it. And special thanks to Jennie for the interview and for Erin Kane's help in arranging it. Check back soon for more of "all the buzz on what wuzz."
Posted by Matt Nadel at 6:13 PM