Number One: Mike Mussina
Why? Mussina won 270 games for the Yanks and Orioles, which are more wins than Hall of Famers Jim Palmer, Carl Hubbell, and Bob Gibson had. The five-time All Star finished in the top six for the Cy Young vote nine times. Number Two: Greg Maddux
Why? To put it in simple terms, according to baseball-reference.com, Maddux is the fifth greatest pitcher of all time. The 355-game winner and eight-time All Star for mainly the Cubs and Braves also has the most Gold Gloves won by any player in baseball history at 18. Did I mention that he won four consecutive Cy Young Awards, the first pitcher to ever accomplish this? 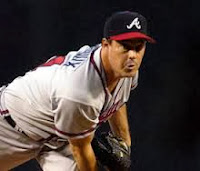 Number Three: Jeff Kent
Why? The five-time All Star and 2000 NL MVP hit .290 for his career along with 377 home runs. This doesn't seem that great, right? Well, you must not know that he was a second baseman, a position not at all known for average and power. So, not only do I think Kent should be a HoFer, but he is also one of the best second baseman of all time.

Number Four: Tom Glavine
Why? The ten-time All Star for the Braves and Mets is one of only 24 pitchers to have at least 300 wins. The two-time Cy Young Award winner also played in five Fall Classics and finished with a career ERA in the World Series of 2.16.

Number Five: Frank Thomas
Why? Out of all the players on the ballot for the first time, the Big Hurt is the only one with 500+ home runs. The five-time All Star for mainly the White Sox also regularly batted over .300 during each of his seasons and finished his career with a .301 clip. 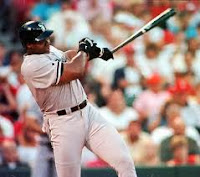 Well, those are my picks for the players who are on the Hall of Fame ballot for the first time who should be elected into the Hall of Fame. But remember: there are other people who I think should be in the Hall who are not on the ballot for the first time. If you want to check those players out, click here. Anyway, thanks for reading this post. I hope you enjoyed it and check back in a few days for more of "all the buzz on what wuzz."
Posted by Matt Nadel at 6:34 PM