Recently, I had the chance to interview Ben Nicholson-Smith of MLB Trade Rumors.  MLB Trade Rumors is a site that focuses on baseball trades and free agent signings which was named as one of the 25 best blogs of the year in 2011 according to TIME Magazine. It is read by many people including baseball writers and baseball players. Ben has written a ton of articles for the site, attended many baseball-related events and meetings, and he has been involved with baseball for TV and radio... so he's a real expert when it comes to baseball trades. Anyway, because he is such an expert on baseball trades, I wanted to ask him a bunch of questions about trades throughout baseball history. So keep on reading below to see my questions and his answers:

Matt: What was the best trade ever in your opinion?
Ben: For me, the best trades are the ones that work out for both teams. When the Marlins sent Trevor Hoffman to San Diego in 1993, they were parting with a future Hall of Famer, but they got Gary Sheffield in a deal that worked out well for both sides. Jeff Bagwell, Derek Lowe and Jason Varitek, Lou Brock, John Smoltz, Cliff Lee, Grady Sizemore and Brandon Phillips, Ryne Sandberg, Nolan Ryan, Curt Schilling, and Fred McGriff were acquired in famously one-sided trades. These deals worked out tremendously for one team and horribly for the other. It’s the kind of deal general managers lose sleep over, but not my personal favorite. Perhaps the fairest trades ever consisted of players -- Harry Chiti or John McDonald, for example -- who were actually dealt for themselves.

Matt: What was the worst trade ever?
Ben: Some of the trades I mentioned above could be considered among the worst ever. The Phillies could have used Ryne Sandberg, for example! More recently, the trade that sent Ubaldo Jimenez to Cleveland for Drew Pomeranz and Alex White hasn’t worked out for either side. It had the makings of a win-win deal, but hasn’t worked out at all to this point.

Matt: Are there any trades that you think should happen today?
Ben: Today? No. At this point in the season, rosters are basically set. They have to be, since it’s difficult to complete a trade in August or September, when players must first be placed on waivers. Once the offseason begins and a new waiver period opens, there are lots of potential trade scenarios that could work out. How does David Price to the Rangers for Jurickson Profar sound to you?

Matt: Are there any trades you wish had happened?
Ben: In general, I want teams to make trades -- after all, my job is to anticipate, report on and analyze deals. But I don’t wish for specific deals to be made.

Matt: How does your site get its information?
Ben: We have lots of ways of getting information. These days a lot of news breaks on Twitter, so we’re always online checking out the latest developments. Lots of smaller news gets announced via press releases, so we often get information in our email inbox. Other than that, it’s a question of looking online for the latest reports and talking to our own connections around the league.

Matt: Have you ever suggested trades to baseball execs?
Ben: I haven’t and I don’t expect to. I’ve discovered that it’s surprisingly hard to come up with a trade scenario that would work for both sides. Plus, baseball execs have surrounded themselves with people they trust to make these assessments. Why hire scouts and baseball operations assistants, if you’re going to rely on the judgment of a writer?

Matt: Who is the best general manager today and of all time?
Ben: All-time I’ll say Branch Rickey, since he was incredibly innovative. John Schuerholz belongs in any conversation about the game’s best GMs. So do Pat Gillick and Frank Cashen. Tal Smith had a pretty remarkable career as well. As for who’s the best GM right now, I think we’ve got to be a little more specific. Each MLB owner has a different set of requirements for the GM role. Some say “win with a $150 million payroll.” Others say “win with a payroll that will fluctuate between $50-80 million.” Those two job descriptions are very different. Brian Cashman wins with lots of resources in New York and Andrew Friedman wins with less money in Tampa Bay. I’m prepared to say both are excellent GMs, but I’m not prepared to say one is better than the other.

Matt: What does it take to be a great general manager?
Ben: That’s probably a question for a team president or GM, but I’ll do my best to answer it based on what I’ve observed. General managers clearly need to be able to develop, express and implement a vision for their organization. They need to be capable of surrounding themselves with strong baseball people. The best general managers seem to be able to complement their own skillsets with people who have different backgrounds and strengths. This also means knowing when to rely on lieutenants and when to trust their own judgment. Communication skills are also a must; general managers must be capable of dealing with team owners and presidents, scouts and others in baseball operations, the media, agents and players. I don’t think GMs need to revolutionize the position to be successful. There are only so many Branch Rickeys out there, only so many Billy Beanes. But I do believe GMs need to be capable of bold, unexpected moves.

There you have it folks.  Hope you enjoyed this!! Special thanks to my trade expert buddy, Ben Nicholson-Smith, for his great answers!!!

Keep on reading, because there's lots of good stuff in the works!!!!!!! 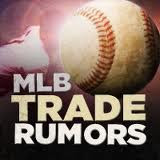 P.S. I just put up a survey on the top right column of my blog.  You will need to pick who today has a better mustache between Rollie Fingers and Luis Tiant. You will need to do some research on Google Images (type in their name + today in the search), but it's worth a look. Thanks.
Posted by Matt Nadel at 6:25 AM