I know I've been focusing a lot on players' nicknames lately, but I wanted to tell you guys about a baseball player who didn't just run the bases, but also ran for yards:

From '86-'94 with the Royals, White Sox, and Angels (he did not play in '92), Bo Jackson had a pretty respectable career in the MLB, hitting 141 homers and 415 RBIs. He also had a 4-year career in the NFL with the Los Angeles Raiders (now in Oakland) from 1987-1990 as a running back, rushing for 2,782 yards. He was the first player to become an all-star in both sports, and won the Heisman Trophy in 1985 (trophy given to the best college football player). He's not Hall of Fame-worthy in either of the sports, but he was still a very exciting player to watch. Bo knew baseball. 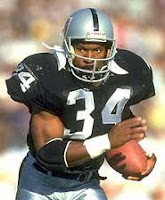 PS - Don't forget to vote in the final round of the all time nickname survey in the right column above the Blog Archive, and tell all your friends.