As you know, I have been posting surveys over the past six weeks about who had the greatest nickname in baseball history. Just to recap, the first five surveys were grouped by fielders, base stealers, pitchers, hitters and all-around nicknames. The final survey, which was posted about two weeks ago, contained the nicknames that won their respective surveys. Anyway, the results are in! According to my latest survey, the baseball player with the greatest nickname was............ The Sultan of Swat (Babe Ruth)! Ruth beat The Wizard of Oz (also known as Ozzie Smith) 20 votes to 19. In third came Mr. October (Reggie Jackson) with 12 votes, in fourth was Dr. K (Dwight Gooden) with three votes, and in last place with no votes was Larcenous Lou (Lou Brock). Anyway, let me tell you all a little bit about Babe, one of the greatest players ever in America's pastime:

Ruth started out as a pitcher for the Red Sox in 1914. He was actually a pretty decent one, but because of the shortage of players due to World War I, he was moved to the outfield in 1918. After the 1919 season, Babe was shipped out to New York to play for the Yankees. He helped them to their first World Series victory, which came in 1923 against the Giants. In 1926, he made the last out of the World Series when he was caught stealing second. That was the only time the World Series has ended on such a play. In 1927, he broke the all-time home run record at the time (which was actually set by himself in '23 when he hit 54 dingers) when he hit 60 home runs. He continued to post great numbers through the years. In the third game of the 1932 World Series against the Cubs at Wrigley Field, he took two called strikes from pitcher Charlie Root, and then supposedly pointed to center field as if saying "I'm gonna hit the next pitch into those seats," and he did (check out the photo below). It is one of the most disputed gestures in baseball, but the "Called Shot" was said to be true by Ruth himself. In the first ever All-Star Game in 1934 at Comiskey Park in Chicago, he hit the first ever All-Star game homer. He ended his career with 714 homers and a .342 batting average. He was one of the first five players elected into the Hall of Fame in 1936 (along with Christy Mathewson, Walter Johnson, Ty Cobb and Honus Wagner) and is considered one of the best players in baseball history. 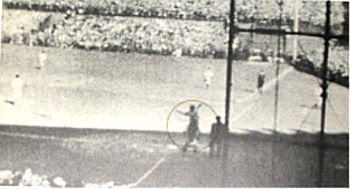