The Sultan of Swat. The Caliph of Clout. The Behemoth of Bust. The Bambino. The Babe. All of these nicknames are attributed to one man and one man only: George Herman “Babe” Ruth, perhaps the greatest hitter to ever play the game of baseball. But believe it or not, he actually started off as a pitcher. If you want to learn how he transitioned from the mound to the batter’s box, read ahead.

Babe Ruth was born in Baltimore, Maryland. He was a very mischievous kid and was forced by his parents to live and study in St. Mary’s Industrial School for Boys. There, he learned how to play the game that would eventually make him famous: baseball. So, like I said before, Ruth started out as a pitcher for the Boston Red Sox in 1914 and actually wasn’t that bad. In his Sox pitching career, he went 89-46 with an ERA of 2.19 and even set a record (that has since been broken by Whitey Ford) for the most consecutive World Series scoreless innings pitched (29 and two thirds). However, due to a shortage of players on the Sox roster because of World War I, Ruth had to switch to the outfield, where Ruth did pretty well, leading the league in home runs in both seasons he was in Boston’s starting lineup. However, Red Sox owner Harry Frazee was not happy with the Babe’s loud and rambunctious personality and because of this, in 1920, he was shipped to the New York Yankees in exchange for $100,000, which at the time was a lot of money. Even though Frazee and the Red Sox did get a lot of money for their former pitching star, the Yankees got the better end of the deal by far. For 86 years, from 1918 until 2004, the Red Sox won exactly no World Series and the fans blame this on the Ruth deal, aka the “Curse of the Bambino.”

Ruth hit 54, 59, and 35 home runs, respectively, from 1920-1922, for the Yanks. In the two later years, the Yankees even reached the World Series, but lost both of them to the Giants. But everything changed in 1923. The Yankees opened up a new stadium, Yankee Stadium, and Ruth hit the first home run there. Eventually, the Yankees did get their first of 27 World Series wins by beating the Giants in the ’23 Fall Classic in six games. Babe continued to put up monster home runs year-after-year and it all came together for him and his team in 1927. Not only did the ’27 Yankees win 110 games and the World Series that year, but Babe Ruth also hit a then-record 60 home runs!! 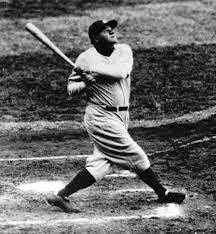 The transcendent hitter continued to post excellent statistics all across the board for the next several years, but the most memorable and recognizable moment of his career was the “Called Shot.” In Game Three of the 1932 World Series versus the Chicago Cubs at Wrigley Field, Ruth took two called strikes from pitcher Charlie Root, and then supposedly pointed to center field as if saying "I'm gonna hit the next pitch into those seats," and miraculously, he did. It’s one of the most disputed gestures in baseball, but the "Called Shot" was said to be true by Ruth himself. Two years later, in the first ever All-Star Game in 1934 at Comiskey Park in Chicago, Ruth hit the first ever All-Star game homer! 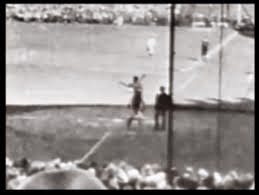 Babe Ruth changed the game of baseball. He made home runs relevant because he hit so many of them, 714 to be exact, which is now third on the all-time list. He also batted an amazing .342 lifetime, drove in 2,214 career RBIs, and set the record for the highest slugging percentage in baseball history (a record that still stands today) at .690. Obviously, he was one of the first five players elected into the first Hall of Fame class in 1936 (along with Christy Mathewson, Ty Cobb, Honus Wagner, and Walter Johnson) and is considered one of the best players in baseball history. There will never be another Babe Ruth because the Bambino was just that great.

Thanks for reading this post and I hope you enjoyed it. Check back soon for more of "all the buzz on what wuzz."
Posted by Matt Nadel at 12:28 PM