The New York Yankees are not only famous for their great players and teams, but they also have had a slew of great managers. Some include Miller Huggins, Joe McCarthy, Casey Stengel, Ralph Houk, Billy Martin, and Joe Torre. However, today I want to talk about the Hall of Fame Yankee manager who won the most games among Yankee managers: Mr. Joseph Vincent McCarthy.

McCarthy didn't really play in the Bigs as a player (he had a 15-year minor league career), but his years as manager of the Cubs, Red Sox, and most famously the Yankees were astounding, which eventually led to his Hall of Fame induction in 1957. In total, he won 2,125 games as skipper from 1926-1950, eighth on the all-time list. However, he is first on the all-time list of managerial winning percentage at .615. Marse Joe led his teams to nine World Series, winning eight. All those World Series wins came with the Yankees, including four straight from 1936-1939. (By the way, the word "marse" is a way that Americans in the South used to say "master". So McCarthy's real nickname is Master Joe.) As I mentioned before, he is the winningest Yankee manager in the franchise's history with 1,460 wins and led his teams to 15 90+ win seasons.

McCarthy managed the Yankees during their trip to the 1932 World Series and he faced his former team, the Cubs! Good thing his Yanks swept the Cubbies. Anyway, thanks for reading this post. I hope you enjoyed it and check back in a few days for more of "all the buzz on what wuzz." 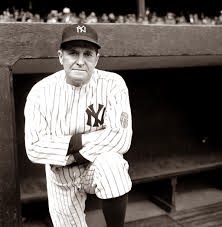