I'm back with another blog post! This post is about a certain shortstop; a shortstop that could field, bunt, and broadcast Yankee games, and who happens to be in the Hall of Fame. All the old folks who are reading this probably know this ballplayer already, but if you don't, let me give you a hint: Scooter.

Phil Rizzuto, a Brooklyn native, stood at five foot six and weighed 150 pounds. Casey Stengel, the manager of the Dodgers of 1937, said he would never amount to anything. Funny, Branch Rickey, owner of the Cardinals during 1945, said the same thing about Yogi Berra. Both became stars, but first was the Scooter, who got that nickname from his minor league teammates because of the way he ran the bases. He was drafted by the Yanks in '37 and played his entire career with the Bronx Bombers from 1941-1956 (he missed 1943-1945 because of military service). He went to five All-Star games and had his best season in 1950, when he won the MVP Award with a .324 BA and excellent defense with the help of double-play partner, Billy Martin. Phil has one of the worst careers for a Hall of Famer, only batting .273, hitting only 38 homers and 563 RBIs. He was a pretty good bunter, but he was really well-known for his broadcasting. With the help of his trademark slogan "HOLY COW!!", he made Yankee games as fun as can be for people to watch, from 1957-1996. He called many famous hits in Yankee history, like Maris' 61st homer of 1961 and Derek Jeter's first of his career in 1996. He was elected into the Hall of Fame in 1994, with his bowling alley-opening best buddy Yogi Berra (also in the Hall of Fame) in the audience in Cooperstown. Rizzuto sadly died in 2007 because of pneumonia, but he will be remembered by many as a wonderful player, broadcaster, and Yankee. 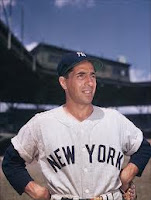