Like I promised you all last time in my Splendid Speedies blog post, I will be blogging today about some great nicknames in baseball history, this time pertaining to fielding abilities:

The Vacuum Cleaner - Brooks Robinson
The excellent fielding third baseman won 16 consecutive Gold Gloves in his career (second most all time) with the Baltimore Orioles in the '60s and '70s, and was elected to the All Star Game 15 times in his career. He also had 2,848 career hits. Not bad for someone known for his fielding. By the way, Greg Maddux, the pitcher, holds the all time Gold Gloves record for any player with 18, but his nickname is the Professor (not very defense-sounding). 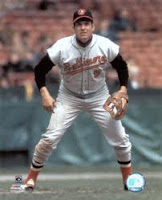 Scoops - Max Carey
Who's Max Carey? Well, aside from having only 2,665 career hits from 1910 to 1929 with the Pirates and Dodgers, he was a great fielder and is in the Hall of Fame.  He earned the nickname "Scoops" for his outfield plays throwing runners out. He has the most outfield assists in NL history since 1900 with 339, and was known as the greatest fielder of his era. He also has the most career double plays by an outfielder with 86. Max's actual last name was Carnarious, but he adopted the last name "Carey" in his first professional baseball game in order to retain his amateur status at Concordia College.

The Wizard of Oz - Ozzie Smith
Probably the best fielding shortstop who ever played the game of baseball, and you're hearing that from a Derek Jeter fan, Ozzie Smith put on a show at shortstop from 1978-1996 with the Padres and Cardinals. He fielded like "The Wizard of Oz", and his signature back flip made him even more legendary. What's kind of funny about this Hall of Famer is that he is one of the worst career hitters to be elected into the Hall; career batting average of .262, career homer total of 28, but he did have 580 career steals and 13 Gold Gloves. Still, to have hitting numbers like that, it must mean that he fielded like a "Wizard". 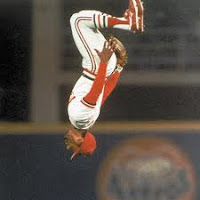 Well, there you have it; some of the greatest fielding-related nicknames in history. Thanks for reading! Check out my blog in a few days for the greatest pitching nicknames of all time.

And don't forget to do my survey.
Posted by Matt Nadel at 7:32 PM