Congratulations to the Washington Nationals on their first World Series in franchise history! Now that the season's over, it's time to talk about awards. As per usual, in this post, I'll be giving you my predictions for the winners of the four major MLB offseason awards in each league: Manager of the Year, Rookie of the Year, Cy Young, and MVP. So, without further delay, let's get to the predictions!

AL Manager of the Year: Rocco Baldelli, Twins
Why? Manager of the Year is always the hardest award to predict, so I'm giving it my best shot here. In his first season as manager of the Twins, he led them to 101 wins and the AL Central title. Not bad, considering the Indians had that division in the bag before the 2019 season started. The Twins really came out of nowhere.

NL Manager of the Year: Dave Martinez, Nationals
Why? I know voting takes place before the playoffs, but having twice as many wins as losses for two-thirds of the season is extremely impressive. Martinez should be very proud of his 93-win Nats, especially after last night's Game Seven.

AL Rookie of the Year: Yordan Alvarez, Astros
Why? 27 homers in 87 games as a rookie is very impressive, but he batted .313 and had an OPS of 1.067. That's insane, even for Mike Trout (more on him later). John Means and Brandon Lowe were contenders for this award at the beginning of 2019, but Alvarez tore it up as soon as he got called up.

NL Rookie of the Year: Pete Alonso, Mets
Why? He set the rookie home run record at 53. I wouldn't be surprised if he wins this award unanimously. Sure, Mike Soroka is a future star, but 53 home runs isn't done every season, even by the most experienced of sluggers.

AL Cy Young: Justin Verlander, Astros
Why? It's very close between Verlander and his teammate, Gerrit Cole, but I'll give the edge to Verlander on the basis of two categories that he led the AL in this year, WHIP (.80) and Batting Average Against (.172), both otherworldly numbers, especially considering JV's home run problems this year.

NL Cy Young: Jacob deGrom, Mets
Why? Poor run support will limit deGrom's votes, but his league-leading strikeouts and being second in ERA and WHIP will help him beat out Jack Flaherty, Max Scherzer, Hyun-Jin Ryu, and many others. DeGrom is just towards the top of the most categories out of all the contenders.

AL MVP: Mike Trout, Angels
Why? It's the safest option, but a good one, nonetheless. Trout led the league in OPS (again) and set a new career high in home runs. Had it not been for a late-season injury, Trout would've won the MVP handedly. Now, it's a little closer with Alex Bregman. 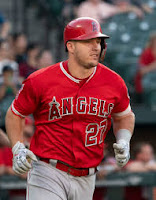 NL MVP: Christian Yelich, Brewers
Why? Your 2019 NL leader in OPS and batting average was also up there for home runs and stolen bases. Cody Bellinger and Anthony Rendon have strong cases, too, but I think this is going to Yelich.

What do you think of my predictions? Leave your thoughts in the comments section below. Thanks for reading this post and I hope you enjoyed it. Check back soon for more of "all the buzz on what wuzz." And lastly, happy Halloween!
Posted by Matt Nadel at 6:37 PM